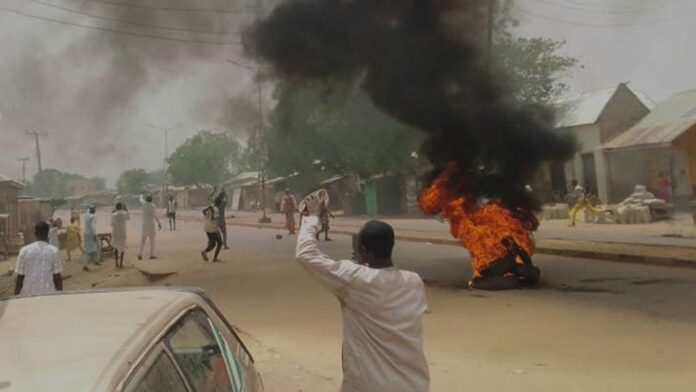 Some videos and pictures were genuine, such as this one

After the killing of Deborah Samuel, a Christian, second-year student in the northern Nigeria city of Sokoto on Thursday for alleged blasphemy, fake news and disinformation have been widely shared on social media.

A war of words erupted on Twitter and Facebook between some Muslims and Christians in the country, with each side accusing the other of intolerance and extremism.

Two days after the killing, a peaceful protest in Sokoto turned violent, with demands for the release of the suspected killers of Ms Samuel.

A plethora of fake pictures, videos and posts have been shared by social media users to incite violence and cause further damage and division in the country.

Many of the fake stories are accompanied by comments on why Nigeria should be divided between the predominantly Muslim north and Christian south.

Facebook user Emeka Fans Page posted a video in which he makes many claims, one of which is “Sokoto people done butcher all the whole Christians in their state”.

His video has been viewed over 670,000 times and shared more than 5,000 times. He also urges his followers to continue sharing the video.

A police statement said two protesters were shot by the police when they tried to occupy the palace of the Sultan of Sokoto, the spiritual leader of Nigeria’s Muslims.

There are some genuine videos that show protesters burning tyres on streets, wielding machetes, knives and sticks while running across the streets and chanting Islamic prayers. Another video showed people looting and burning shops in a market. But there is no evidence of killing or butchering as claimed by Emeka Fans Page.

The state government has imposed a 24-hour curfew to regain peace in the state.

Man arrested for cutting off boss’ manhood and assaulting his wife