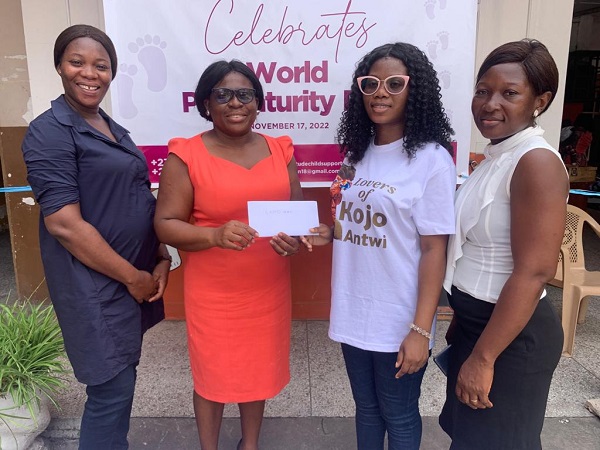 A group of supporters of music maestro, Kojo Antwi, known as ‘Lovers of Kojo Antwi’ have donated a cash amount to the Princess Marie Louise Children’s Hospital in Accra on Thursday, November 24, to support the Nutrition Rehabilitation Centre.

A total amount of GH₵1,200 which was presented to the hospital was also to help settle hospital bills of some patients who had not been able to pay their bills at the hospital.

The Founder of the group, Yaa Aso, explained that their gesture was part of efforts to mark the birthday of the Maestro, Kojo Antwi, otherwise called Mr. Music Man on November 24.

She noted that Kojo Antwi has for many years dedicated the day to performing live, close-up concerts before his fans, and therefore he was worth celebrating.

In view of the donation she said the group intends to make similar donations to help the needy and vulnerable in society.

“We are here today to donate this cash amount to support malnourished children and also to support those who have financial issues in paying their bills, to mark the birthday of the Maestro Kojo Antwi,” she said.

She indicated that since the formation of the group in 2020, they have done similar donations at Motherly Love Orphanage, where they donated items including toiletries, bags of rice, cooking oil, soft drinks and some confectionaries.

She expressed the commitment of the group to do several donations across the country, while urging other groups and organisations to support the hospital and other vulnerable people in society.

Appreciation
The Head of Clinical Services at the hospital, Dr Margaret Neizer, thanked the group for the donation and promised to ensure that the money was used for its intended purpose.

“We are very happy and surprised, we do have a lot of needy clients who are not able to access some of the services and drugs that they need – so this gesture would go a very long way to help such children.

“We want to assure the group that the monies would go to the people they are intended for to pay bills and pay for medication,” she said.

She also appealed to the public and benevolent organisations to come to their aid as the hospital was in need of a lot of equipment.

“We will be happy to have help in providing some equipment, it’s not just the nutrition rehab, for the laboratory for instance we need a new blood fridge and some other equipment in the wards,” she said.