Driver who drove fuel tanker on fire to safety honored 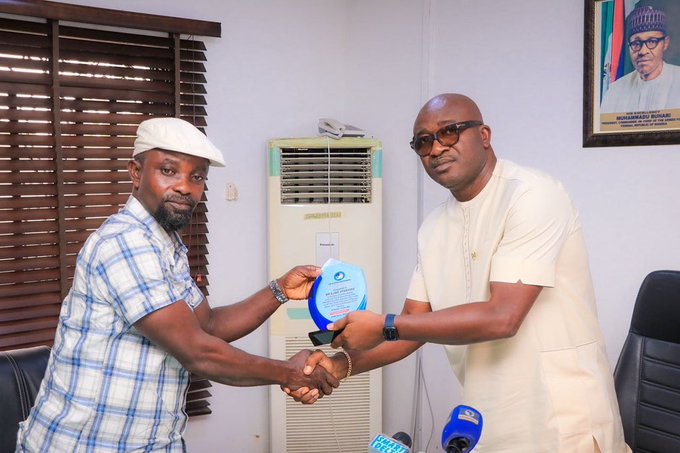 Nigeria’s Delta state has honoured a man who was hailed a “hero” for risking his life by driving a burning fuel tanker away from a densely populated suburban area.

Ejiro Otarigho sped off in the burning tanker to safety before onlookers dragged him away from the ball of fire.

He was also praised for “his bravery and heroism in averting a major disaster that could have resulted in the death of many in the area”.

Today, the Delta State government, presented a letter of commendation, an award plaque, and a cheque of Two Million Naira, to Mr. Ejiro Otarigho, a tanker driver, for his display of heroism as he drove a burning tanker away to a safe place in Agbarho, Ughelli North LGA. pic.twitter.com/Q9yr7YiSAr

A Nigerian man who has been hailed a “hero” for risking his life by driving a burning fuel tanker away from a densely populated suburban area in Warri Delta State has recounted to the BBC the scary ordeal.

“‘There was just one thought on my mind and that was to plunge the burning tanker into a river nearby’,” Ejiro Otarigho said.

”My [assistant] was the one who alerted me to the fact that our tanker was on fire. It was a scary ball of fire,” he continued.

Mr Ejiro said he had just offloaded some of the contents of the tanker and was heading towards another point when tragedy struck.

With no time to waste, he told his assistant to get off and he sped off in the burning tanker amidst shrieks of fear and dismay from onlookers.

In the dangerous incident, any slight error of judgement from Mr Otarigho or, a sudden explosion, could have resulted in total disaster.

“My intention was to drive to the river. When I got there the car steering got stuck and I couldn’t move any further,” he recounted.

“I said if I drive straight, the truck may fall and that may cause another problem. So I just have to park in the open space.”

Mr Otarigho finally got the tanker to safety and onlookers can be seen in one of the videos dragging him away.

Mr Otarigho is safe and sound save for some smoke inhalation and a few bruises.

Tanker fire accidents are common in Nigeria and many lives have been lost with accompanying damage to property.

Gyan to make debut for Legon Cities against Medeama