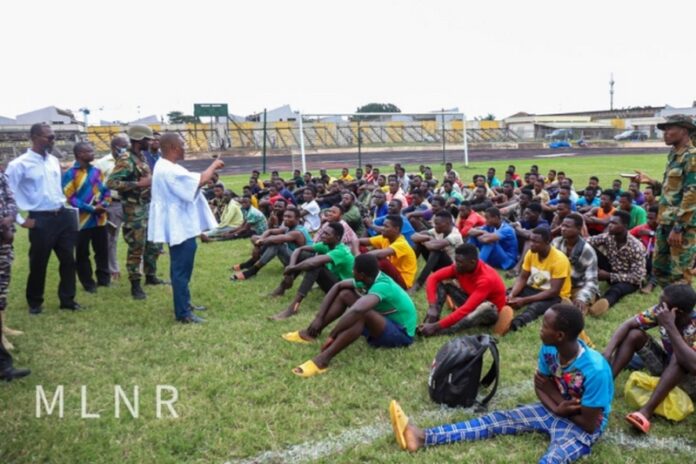 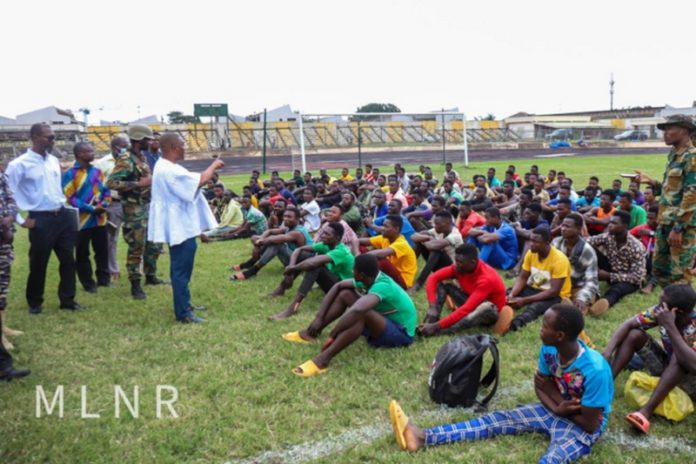 A Military anti-galamsey taskforce, Operation Halt II, has arrested 164 suspected illegal miners at Anyinam and Mampong in the Eastern Region.

The suspects, made up of 159 males and five females, local and foreign nationals from Ghana, Nigeria, Burkina Faso, Niger, Mali and Ivory Coast were rounded up by the Military task force.

The swoop, conducted by the Ghana Armed Forces on Thursday, September 15, 2022 forms part of government’s rejuvenated and renewed fight against illegal mining.

Speaking to the press after the suspects were brought to Accra for processing and prosecution, the Deputy Minister for Lands and Natural Resources in charge of Mining, George Mireku Duker, commended the taskforce for acting swiftly on the Ministry’s directive to clampdown on activities of both locals and foreign nationals in the illegal small-scale mining sector.

Mr Duker provided further details on the suspects and assured that they will be handed over to the police and relevant authorities for processing and prosecution to begin.

“We asked the security agencies to conduct a massive operation to get these foreign nationals who have invaded our environment. These are people from neighbouring countries who have invaded mining concessions near river bodies in this country” he said.

“I want to commend the Ministry for the effort they have shown to arrest 164 illegal miners. They also have people who are providing other services. One of them confessed that she is happy they have been arrested as she was trafficked to Ghana. We will hand them over to the appropriate authorities for them to take the necessary actions,” he concluded.

He served a strong notice to persons engaged in illegal mining that government is not going to relent on its promise to end illegal mining.

Mr Duker admonished recalcitrant individuals and groups in the illegal mining business to shun their harmful activities, promising that when apprehended, the law will take its full course.