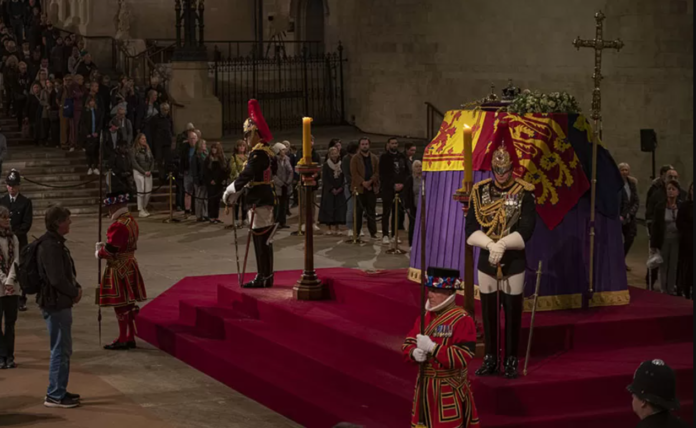 Thousands of people have been queuing along the banks of the River Thames to view the Queen’s coffin as she lies in state in London’s Westminster Hall.

Queues have been building since Wednesday morning, with hundreds of thousands of people expected to pay their respects before her funeral on Monday.

A line of mourners hoping to view the coffin is snaking for around five miles from Westminster across Lambeth Bridge and along the river to Southwark Park. Some have queued for hours, sometimes overnight, in all weathers for a chance to pay their respects.

Westminster Hall opened its doors to the public on Wednesday after a grand procession brought the Queen’s coffin from Buckingham Palace. The lying-in-state will continue until 06:30 BST on Monday, the day of the state funeral. The government has warned people could face 30-hour waits to get in.

They will walk by the Queen’s closed coffin, which rests on a raised platform, known as a catafalque, beneath the 11th Century hall’s medieval timber roof.

Each corner of the platform is being guarded in a continuous vigil by soldiers from units that serve the Royal Household.

The coffin is draped in the Royal Standard and topped with the Imperial State Crown, a wreath of white roses and dahlias and the Sovereign’s orb and sceptre.

The grand hall is the oldest part of the Palace of Westminster, at the heart of British government.

The last member of the Royal Family to lie in state in the hall was the Queen Mother in 2002, when more than 200,000 people queued to view her coffin.

The BBC has a dedicated live stream for those unable to travel to London. The service is available in the UK on the BBC home page, the BBC News website and app, iPlayer, BBC Parliament and the red-button. It is also available internationally via bbc.com/news.

On Wednesday, crowds of mourners packed the streets between Buckingham Palace and Westminster for the slow ceremonial procession to carry the coffin to the hall.

In the bright sunshine that followed the rain, the coffin made its way through the heart of the capital borne on an open gun carriage of the King’s Troop Royal Horse Artillery, drawn by seven black horses.

The gun carriage, known as the George Gun Carriage, carried King George VI’s coffin in 1952 and was used in the Queen Mother’s funeral in 2002.

To the sound of funeral marches played by the Scots Guards and the Grenadier Guards, the procession stepped off at a slow pace of 75 steps per minute – a tempo typically reserved for such sombre occasions.

King Charles III, wearing full ceremonial uniform and carrying his field marshal baton, followed behind the coffin on foot, accompanied by his siblings as well as his sons, Prince William, dressed in his Royal Air Force uniform, and Prince Harry in a morning suit.

The sight of the brothers together, walking behind the coffin, evoked poignant memories of their mother Diana’s funeral 25 years ago, said royal correspondent Sean Coughlan.

Up to 1,000 members of the armed forces in ceremonial dress took part in events surrounding the parade.

Behind mounted Metropolitan Police, the procession was headed by the Household Cavalry and the Grenadier and Scots Guards. They were followed, just ahead of the Queen’s coffin, by members of the Royal Household, those working closely with the Queen.

Following the King and other royals behind the coffin and bringing up the rear of the procession were members of the King’s former household, when he was known as the Prince of Wales.

Camilla, the Queen Consort, the Princess of Wales, the Countess of Wessex and the Duchess of Sussex travelled to the hall by car.

Guns were being fired from Hyde Park at one-minute intervals throughout the procession. Big Ben also tolled.

As her coffin passed by some in the crowd burst into tears, BBC correspondent Nick Beake said. Others made the sign of the cross, army veterans saluted their former commander-in-chief – while families embraced, he added.

My best years on radio are with Angel FM – Ohemaa Woyeje