Why the country wants to bring in 1.5m immigrants by 2025 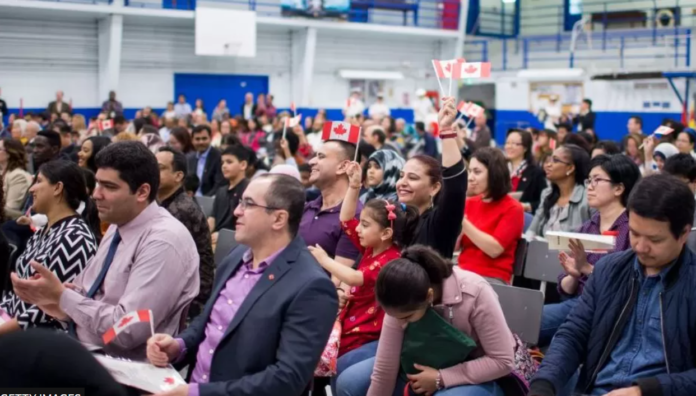 Canada is betting big on immigration to fill the gap in its economy left by ageing Baby Boomers leaving the workforce – but not everyone is on board with bringing in so many people from abroad.

Earlier this month, the federal government announced an aggressive plan to take in 500,000 immigrants a year by 2025, with almost 1.5 million new immigrants coming to the country over the next three years.

This plan would see Canada welcome about eight-times the number of permanent residents each year – per population – than the UK, and four-times more than its southern neighbour, the United States.

But a recent poll shows that there is also anxiety about welcoming in so many newcomers.

The reasons are in, some ways, about simple math. Like many western nations, Canada has an aging population with a lower birth rate. What that means is that if the country wants to grow, instead of shrink, it will have to bring in immigrants.

A unique place in the world

Today, about one in four Canadians have come to the country as an immigrant, the highest among G7 nations. Compare that to the US, known colloquially as the world’s melting pot, where only 14% are an immigrant.

The UK also has an immigrant population of about 14%.

Madeleine Sumption, director of the Migration Observatory at Oxford University, said these numbers do not mean the UK is behind in immigration, but rather than Canada is a bit of an “outlier”.

The UK, a small island with twice the population of Canada, already has high population density, while Canada, which has a population of just over 38 million and one of the largest land masses in the world, has room to grow.

“Generally the UK has not had an objective of increasing population in the same way that Canada (has) done,” she said.

Geoffrey Cameron, a political scientist at McMaster University, said that while many countries, like Canada, face lower birth rates and an aging population, the success of any immigration system relies on popular support.

“The limiting factor for most countries is public opinion,” he said.

In the US, where the number of migrants entering the country through the southern border has reached an all-time high, there is overall a concern about having more immigrants than there are jobs.

Pre-Brexit, a wave of European Union migrants from eastern Europe moving to the UK created a backlash against migration. But over the past several years, Ms Sumption said, popular opinion for immigration has risen, in part because people believe the country has better control over who comes in than they did before.

Canada, meanwhile, has historically had very high support for immigration.

“I think part of the reason for that is that there is a degree of public trust that immigration to Canada is well-managed by the government and also is managed in a way that serves Canada’s interests,” Mr Cameron said.

But that does not mean that there are no immigration concerns.

In recent years, an influx of migrants at the US border has caused some controversy, and the emergence of a new fringe right-wing party in 2018, the People’s Party of Canada, kept the topic in the national conversation in the lead-up to the 2019 federal election.

Quebec Premier Francois Legault said he is concerned more immigrants would weaken the French language in the province.

And while it’s true that Canada may have more room to grow, some places are still feeling the crunch. Major cities like Toronto and Vancouver – where about 10% of the population currently lives – have affordable housing crises.

In a poll of 1,537 Canadians conducted by Leger and the Association of Canadian Studies, three out of four said they were somewhat or very concerned about the affect the new plan would have on housing and social services. Almost half, 49%, said the targets were too high, while 31% said that they were the right number.

Another way that Canada is unique in the western world is its emphasis on economic immigration – about half of Canada’s permanent residents are welcomed because of their skills, not under family reunification.

This is partly because of how the Canadian system was designed, said Mr Cameron. In the 1960s, Canada shifted from a system of quotas, where different countries were assigned different targets, to a points-based system that gave preference to highly-skilled immigrants who would more easily contribute to Canada’s economy.

“The same kind of principles guide the system today,” he told the BBC.

Globally, this is unique, although Australia and New Zealand have similar systems in place.

In the UK, a bit over one in four permanent residents are welcomed through the economic stream. In the US, only about 20% of green cards are issued for economic reasons. Both countries have signalled they hope to increase the proportion of economic immigrants entering their respective countries, but a big difference for both countries is that most economic immigrants must be sponsored by their employers.

In Canada, a job offer can count towards your total points, but it is not necessary.

While the UK recently switched to a points-based system, Ms Sumption said that in effect, it remains similar to their old system, which gave preference to immigrants who had job offers in place.

Can Canada meet its targets?

Not only does Canada take in more economic-class immigrants than other major nations, the country is also one of the top for refugee resettlement, accepting 20,428 refugees in 2021.

But while the country has set ambitious targets for the future, history has shown it does not always meet its own expectations. In 2021, Canada had a target of resettling about 59,000 refugees – almost three times as many as the country took in.

In an interview with the CBC, immigration minister Sean Fraser said the gap was largely due to Covid-related border closures both in Canada and around the globe.

There is an urgent need to regulate the media – Godfred Dame

We don’t want it today or tomorrow – Walewale residents