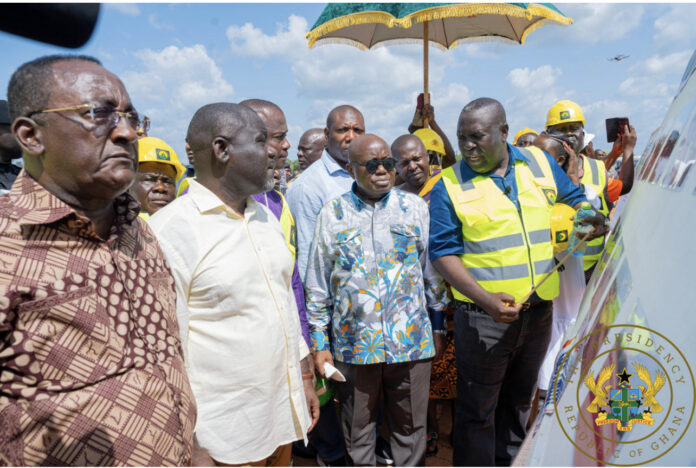 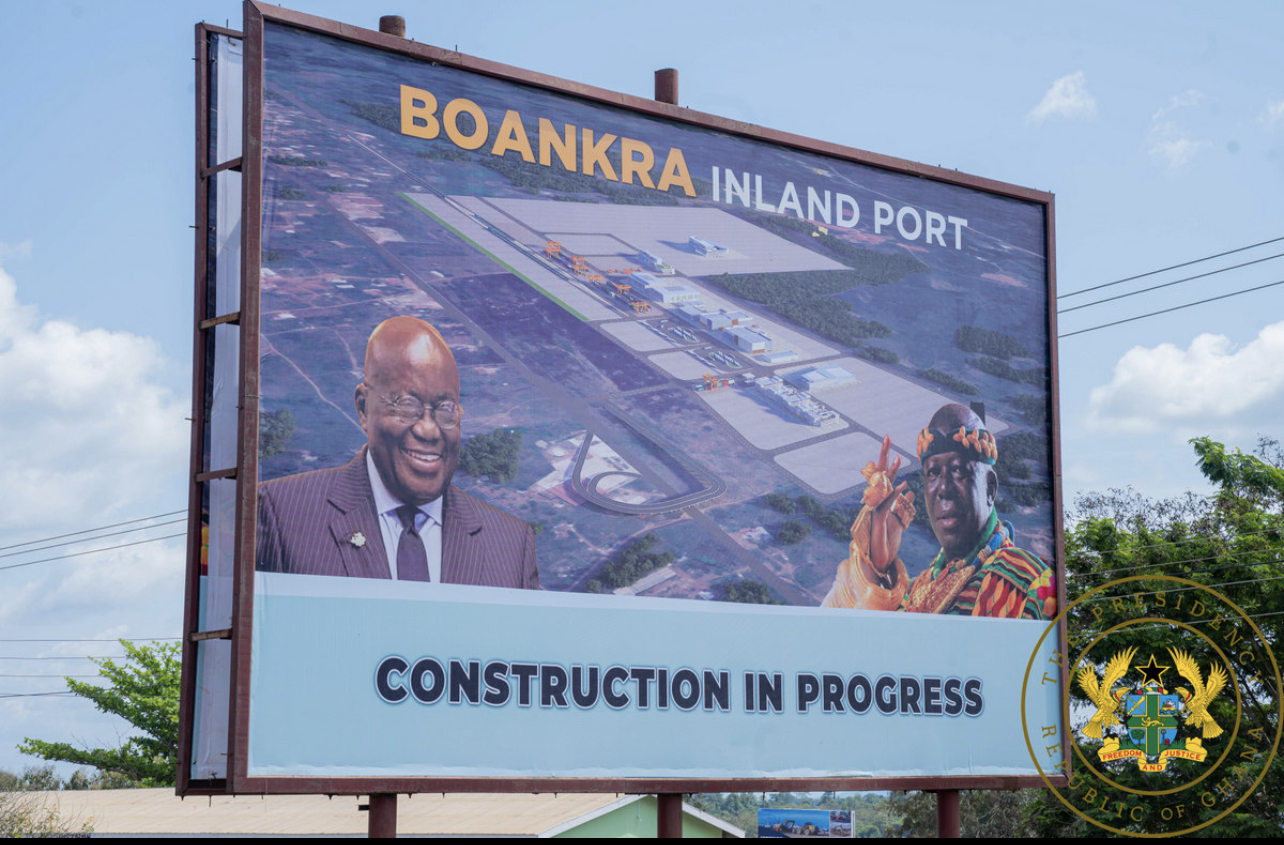 President  Nana Addo Dankwa Akufo-Addo, has been assured that the US$330 million Boankra Integrated Logistics Terminal project, popularly referred to as the Boankra Inland Port Project, which has been on the drawing board for some eighteen (18) years, will be completed by the first quarter of 2024.

The Concessionaire, Ashanti Ports Services Limited, a joint venture of Afum Quality Limited of Ghana and DSS Associates of the Republic of Korea, made this known on Sunday, 16th October 2022, when President Akufo-Addo visited the site of the construction.

Covering a total land area of 413 acres, the President was informed by the Concessionaire that “we are working to eliver this job within the schedule date. By the end of 2023 eighty percent (80%) will be done, and, by the end of the first quarter 2024, we will finish the project.”

The Concessionaire was hopeful that the eastern and western railway lines will be completed on schedule, which will further improve the viability of the Boankrainland port.

The idea of the Boankra Integrated Logistics Terminal project has been in the pipeline since the days of the Government of the 2nd President of the 4th Republic, His Excellency John Agyekum Kufuor. In attempting to bring it into fruition, it encountered a number of challenges, a significant one being the exit of the NPP government in 2009. 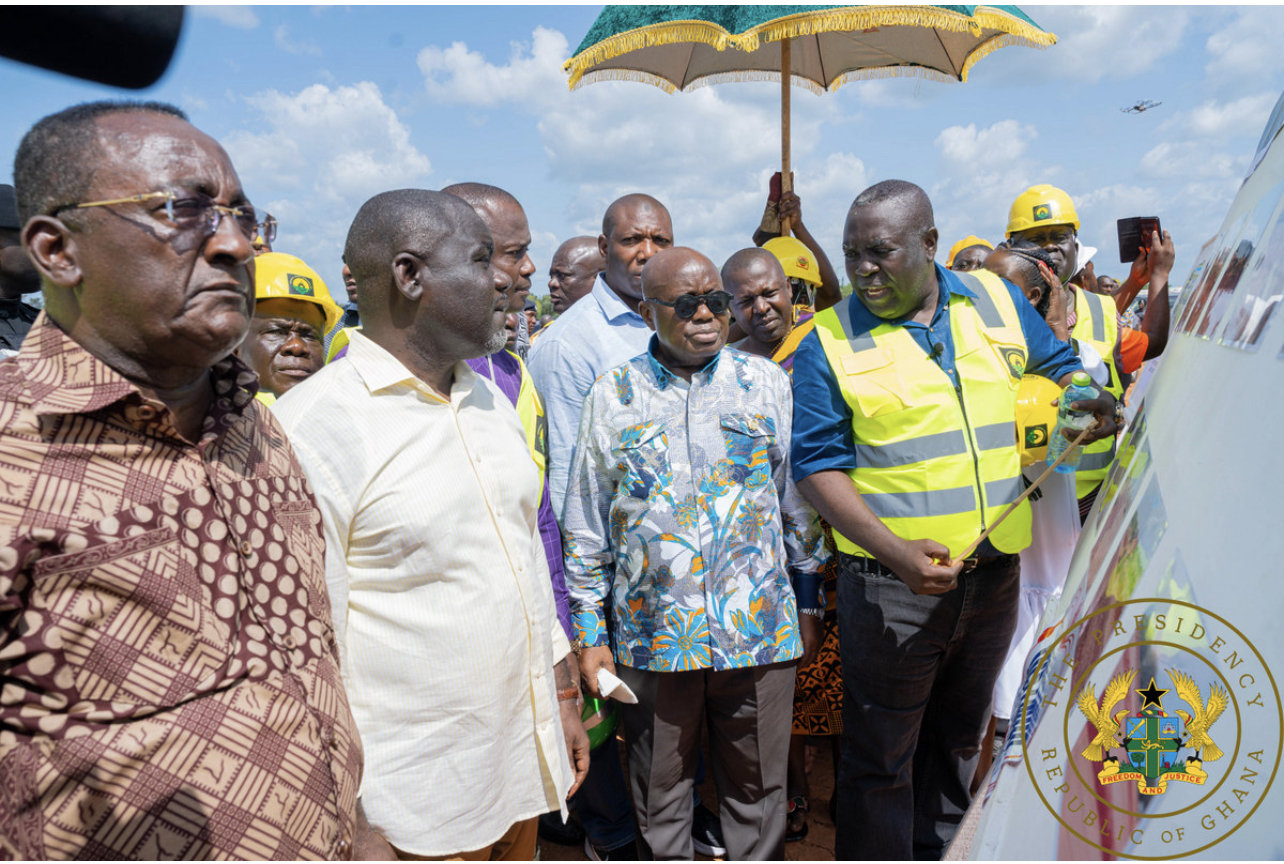 Cutting the sod for the construction of the Port on Thursday, 5th November 2020, the President explained that the Boankra Inland Port project has been initiated to provide service to importers and exporters in the middle and northern parts of the country, and also to act as a major conduit for the efficient transportation of transit traffic to and from our neighbouring landlocked countries of Burkina Faso, Mali and Niger.

After completion of the Terminal, it will be fitted with an inland clearance depot, customs bonded and unbonded estates, commercial areas such as banks, offices and trading facilities, vehicle parking areas, light industrial areas, and an administration complex.

The Project will also offer significant employment opportunities for both skilled and unskilled labour during the two phases of construction and operation. Beyond the creation of jobs, there are other ancillary small and medium scale businesses that will be located within the enclave to support the operations of the Terminal.

“It is noteworthy that the transformation of the Ghanaian economy, from a raw material producing and exporting one, to an industrialised one, will be given a huge impetus with the coming on stream of this facility. Government’s commitment to establishing firmly the economy of Ghana on a solid path of industrialisation, with the view to delivering a vision of self-reliance, development and prosperity for all, is unwavering,” he added.

The Concessionaire, Ashanti Ports Services Limited, a joint venture of Afum Quality Limited of Ghana and DSS Associates of the Republic of Korea, according to President Akufo-Addo, is committed to investing a total of $330 million for the realisation of this project. Additionally, the Concessionaire is expected to design, engineer, finance, procure, construct, operate, and maintain the project, and transfer title to the Government after a thirty (30) year period.

“It is my hope and expectation that the Concessionaire will not renege on the confidence reposed in it, and will take all the necessary actions to deliver the project on schedule and on budget,” he added.

One of the success stories of the Africa economic integration agenda is the coming into force of the Africa Continental Free Trade Agreement (AfCFTA).

The objective of the AfCFTA is to promote trade among African countries, with the President stressing that “this will be buoyed by the presence of an effective and efficient transport system, especially as Ghana is playing host to the Secretariat”.

President Akufo-Addo was hopeful that “this project and other similar infrastructure projects, such as the development of the Keta Port, the Tema-Akosombo Railway Line, and the ongoing port expansion projects at Tema and Takoradi Ports, would make a positive contribution in ensuring that Ghana derives maximum benefits from the AfCFTA.”