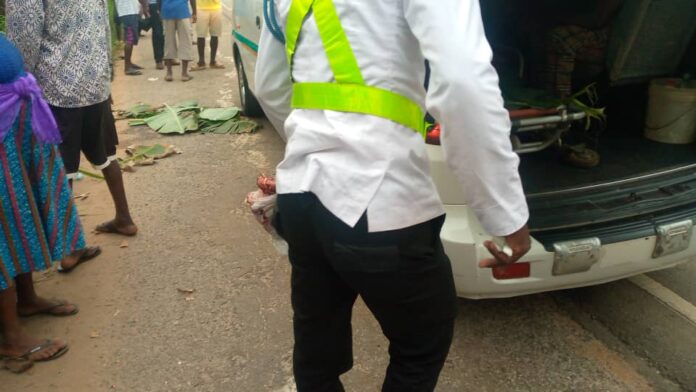 A Sprinter vehicle has been involved in a fatal accident, killing three people and injuring 15 others at Ekumfi Ekotsi.

Per Adom News reports, the sprinter driver lost control from a flat tyre and ran into coconut sellers on the Kasoa Cape Coast Highway in the Central Region.

An eyewitness to the accident, Joe Acquah, said the accident happened after the vehicle’s tyre busted and ran into four coconut sellers as two passengers also lost their lives.

“I heard the vehicle tyre bust and by the time I got there, the vehicle had already crashed into four coconut sellers,” he stated.

“One of them (coconut sellers) was instantly killed by the car but the other three survived,” he added.

According to Mr Acquah, the deceased resides at Ekotsi however, he came to help his peers who sold coconut near the accident scene.

The bodies of the deceased have been transferred to Saltpond Government Hospital Mortuary for Preservation and autopsy.