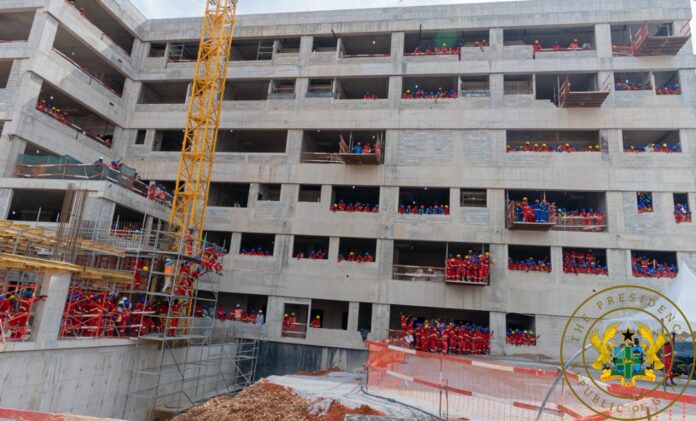 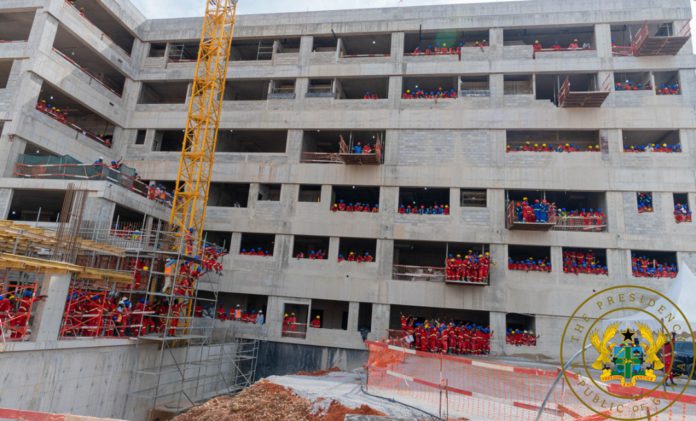 President Nana Akufo-Addo has expressed great satisfaction with the progress of work ongoing on the reconstruction and modernisation of the Maternity and Children’s block of the Komfo Anokye Teaching Hospital (KATH), in Kumasi.

Inspecting the project on Monday as part of his four-day working visit to the Ashanti region, the President was informed that the project, thus far, has seen a 100% demolition of the old structure, with the current progress of work about 60 percent complete.

It will be recalled on Friday, 15th May 2020, the President cut the sod for the re-activation of work on the Maternity and Children’s ward at the teaching hospital after over four decades of neglect.

Before this, the Akufo-Addo government, represented by the Ministry of Health had on 6th November 2019, employed Contracta Construction UK Limited for the design, execution and completion of works and the remedying of any defects, which include the re-modelling and completing of shell spaces for the existing building structure.

Subsequently, after the Contractor’s structural integrity report for the existing building structure, Government decided to revise the scope of works in November 2020 to include complete demolition of the old existing structure, and a re-design, construction and complete equipping of the new and modern mother and child health facility

The revised contract also includes the provision of a 3-year maintenance program for medical equipment with training and technical assistance, procurement of medical and non–medical consumables, and the training of needed human resource training, technical assistance and mentorship programs.

Once completed, it will house an intensive care unit, a high-dependency unit, isolation rooms and student lecture halls, with the capacity to provide catering services for staff, patients and students.

The expanded works have also resulted in the ongoing reconstruction of the Station Basic School classroom block at the UDDARA Barracks, which is scheduled to be completed by January 2023.