The uncompleted secretariat of the Northern Region House of Chiefs

The Northern Region House of Chiefs has called on the government to expedite action on renovation works being carried out on its secretariat, to guarantee their safety in the house.

The Principal King Maker of Dagbon, Kuga-Naa Abdulai Adam, who made the call, said renovation works on the secretariat, which started some time ago, had stalled due to lack of funds.

He said the current state of the facility posed a threat to the lives of paramount chiefs who converged there for meetings.

“A contractor was here to renovate our secretariat but has abandoned the site due to lack of adequate funds”.

“In there, we do not have fans, toilet facility – the place is just not conducive for us during our meetings so the government should come to our aid”, he stated.

He, therefore, appealed to the government to make funds available to help complete the project to ensure the safety and comfort of members during their meetings and other activities.

The Daily Graphic gathered that the rehabilitation works on the secretariat, which is the first time a facelift is being given, began in October 2019 and was expected to be completed three months after works had commenced.

However, after almost three years, the GH¢541,000-project, which was awarded to Malycom Limited, is yet to be completed due to the lack of funds.

The delay in completing the rehabilitation works has forced some of the staff managing the secretariat to resort to operating under trees due to inadequate office space.

The lack of fans in the secretariat’s conference room is also making it difficult for chiefs to meet as the weather is hot.

Kuga-Naa Adam made the appeal to the government when Yesu Dea Family, operators of Jeoun VIP Transport Company Limited, donated a 30-seater coastal bus to the house in Tamale last Saturday.

The gesture is to help address the transportation needs of the house.

The Executive Director of Jeoun VIP Transport Ltd, Yaw Amponsah Marfo, who presented the bus, said the gesture was in recognition of the roles played by the chiefs in the restoration of peace and stability in the Dagbon Traditional Area. 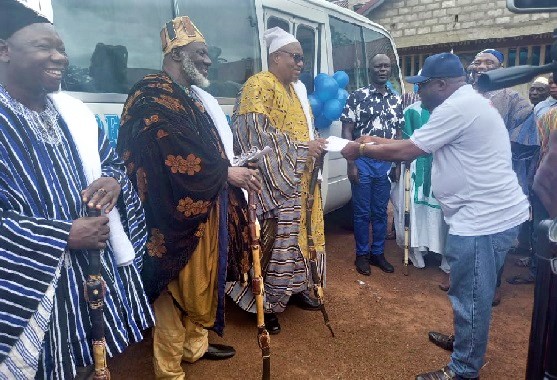 “As a business with vast interest in Dagbon and Ghana, we are keen to contribute to consolidate the peace and tranquility the Northern Region is enjoying, and we hope the donation will resource the house for effective and efficient service delivery to the people of the region,” he said.

Kuga-Naa Adam, who received the bus on behalf of the house, expressed gratitude to the donors for their kind gesture, saying it would help to facilitate their transport arrangements because “it came at a time when the house has challenges in terms of means of transportation.”

Meet the first educated man from Zambulkura in North-East Region