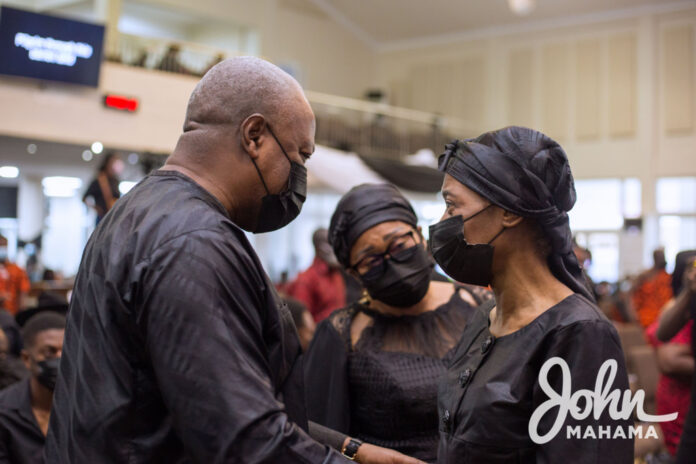 Former President John Dramani Mahama on Saturday, June 26, joined the family, friends and colleagues of the late Kwesi Sainti Baffoe-Bonnie, fondly known as Babo at the Agape Church for his burial service and funeral.

The late Baffoe-Bonnie was a member of the National Democratic Congress (NDC). He served as a Senior Political Advisor to the then Vice President of the Republic of Ghana; John Dramani Mahama, from 2009 to 2012.

From 2012 to 2016, he also served as a Presidential Staffer and Senior Advisor on Political Affairs to John Dramani Mahama who was then President of the Republic of Ghana.

He established the Network Broadcasting Company Limited which runs Radio Gold, TV Gold and Montie FM where he was the CEO from 1995 to 2008.

Taking to his Facebook account, the Former President described Baffoe-Bonnie as, “a friend and brother, just as he was to many others.”

“He had an arresting sense of loyalty and duty. Nothing could faze him once he pledged his support and commitment to any goal or objective, he set himself,” he said.

He added that in all roles the late Baffoe-Bonnie had served in his erstwhile administration, he had greatly distinguished himself.

“I have lost my friend and brother, Babo. Our party has lost a dependable son. Our nation has lost a media icon. And his wife Naana and the children have lost a loving husband and a kind father. Babo, may your soul rest in perfect peace,” he concluded.

Babo left behind a wife and three children.