Laughter galore at He Said, She Said 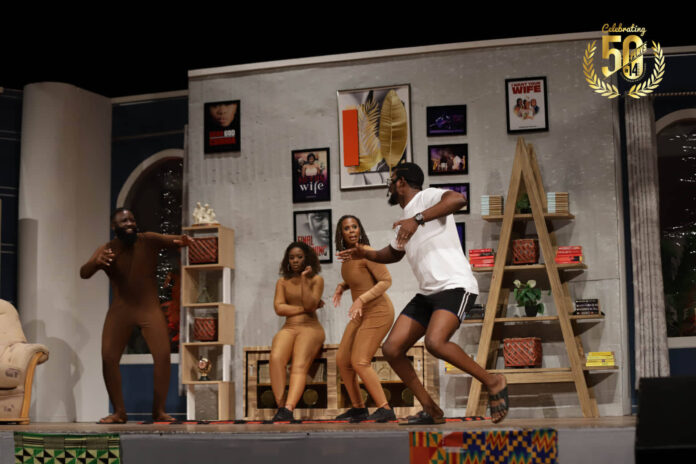 EVEN though marriage is a solemn subject for many, it however succeeded as the theme of playwright Uncle Ebo Whyte’s latest play He Said, She Said to crack the ribs of patrons when it was shown at the National Theatre over the weekend.

Right from the opening act, it prepared them for a laughter galore and they certainly were not disappointed when the curtain came down. And good lessons were learnt too.

Play after play every quarter, Uncle Ebo has set the agenda for discussion on pertinent subjects in society and He Said, She Said, which is his 50th in 14 years equally set the agenda on discussions on the most important aspects and practical details of marriage.

Set in the home of a young couple, Mark and Hannah are having marriage troubles. As a writer, Mark suffers writer’s block and loses his genius ideas following the unending tension in his marriage.

Luck, however, smiles on him when he gets Sam and Lucky, another couple battling for their lives in the hospital after they are involved in an accident as a result of their constant bickering stemming from lack of trust and poor communication.

To come out of coma, they are to share their story with other couples to save their marriage and that is how they come into the lives of Mark and Hannah.

He Said, She Said is a story about love, deceit and betrayal in marriage. While learning about some important “ingredients” to the survival of marriage, patrons were thrown into a state of continuous laughter with statements like ‘Blackmail mu Champions League’, ‘Non performing artistes’, ‘Abonzam Cartoons, ‘A hardened nipple to a bra is no use to the weather and ‘No matter how strong an insecticide is, you cannot use it as deodorant’.

He Said, She Said comes after a long list of other popular plays by Roverman such as What Dad Left Behind, Devil’s Wife, Different Shades of Women”, He Loves Me, He Loves Me Not, Life is Someway, The Day Dad Came, Sins of the Fathers, Trials of the Ghanaian, Don’t Mess with a Woman, Everyone Has a Secret, Apartment N1, What’s My Name 2013, Men Run, Women Cry and Last Flight.

Uncle Ebo’s last production, I Slept With Your Wife staged in July, had huge patronage and the first showing of He Said, She Said over the weekend equally attracted a large audience.

At the show, he expressed his appreciation to patrons for their continuous support over the years.

“To everyone who has ever bought a ticket to any of my shows, to anyone who has told someone about my shows or shared an artwork, I say ‘thank you’ and a happy anniversary to us all for 50 plays in 14 years,” Uncle Ebo Whyte said.

Anger over Amazon’s plans to build headquarters on sacred land