Kyei Mensah, Joe Wise and other leaders of Parliament who failed to declare their assets 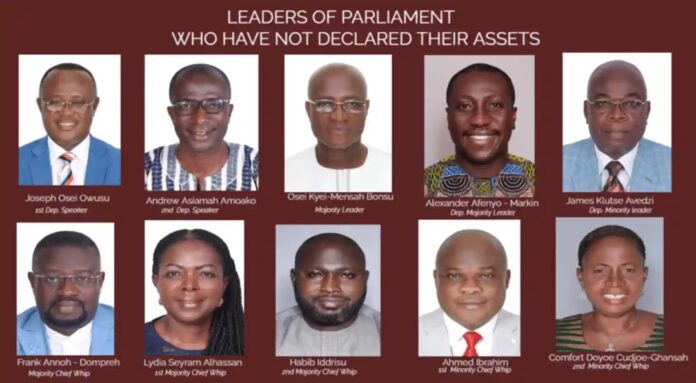 On May 25, 2022, the Speaker of Parliament, Alban Sumana Kingsford Bagbin, had a word of caution for Ghana’s lawmakers.

He wanted the 275 legislators to lead by example by declaring their assets in line with the Assets Declaration Law, 1998 (Act 550) and Article 286 of the 1992 Constitution.

“As the saying goes, charity begins at home. As the constitutional and legal head of the institution of Parliament, the spokesperson, the arbitrator and guarantor of its authority, independence and privileges, I pledge to lead this effort by example,” he said of his commitment.

The speaker said he would engage the leadership of the House and other state actors to put in place measures and systems to ensure that all the lawmakers and staff of Parliament complied with the asset declaration regulations.

Before the Speaker’s edict, The Fourth Estate had written to the Audit Service, on March 4, 2022, under the right to information (RTI) law, requesting information on public office holders who had declared their assets from January 2013 up to 2022.

The Audit Service responded with the data on May 17, 2022. The information shows that a number of MPs, including some of its leaders, had not fully complied with the Asset Declaration Act.

The data showed that 10 out of 13 leaders of the House had violated the country’s asset declaration laws.

When he took to the floor to respond to the Speaker’s clarion call, the Majority Leader and Minister of Parliamentary Affairs, Osei Kyei-Mensah-Bonsu, wanted more institutions roped into the declaration of assets.

“Mr Speaker, come to think of it, article 286 (5) lists the public officers who must submit to the asset declaration. Curiously, some notable officers are left out. For instance, the Council of State, they are not there. Serious Fraud Office [now Economic and Organised Crime Office (EOCO)]: they are watchmen in the system, the Special Prosecutor….

“They are watchmen in the system. We should have a system to watch them. Yet the constitution does not require them to submit themselves to… even now the MMDCEs, are not there. We all know what is happening. We need to have a second look at the constitution,” he said passionately.

Despite his call to widen the net, Mr Kyei-Mensah-Bonsu failed to live up to his responsibility of declaring his assets and liabilities.

Several phone calls to the ten defaulting leaders of Parliament went unanswered. This was followed up with WhatsApp and text messages. Whilst the WhatsApp messages were delivered and read, there was no response, except one.

Frank Annoh-Dompreh, the member of parliament for the Nsawam/Adoagyiri constituency promised to check his records saying “…it cannot be true!” He is still yet to confirm whether he declared his assets and liabilities according to the law.

What the law says

According to Act 550, Public Office Holders (Declaration of Assets and Disqualification), public officers (including the members of parliament) are expected to declare their assets within six months in office and latest by six months after Parliament is dissolved.

“The declaration shall be made by the public officer— (a) before taking office; (b) at the end of every four years; and (c) at the end of the term of his office and shall, in any event, be submitted not later than 6 months of the occurrence of any of the events specified in this subsection.”

Per the law, all the members of parliament, including its leaders, were supposed to declare their assets before taking office. However, two years on, the leaders of the House have not done that.

The legislators, like other public office holders covered by the law, are required to declare their assets relating to:

(a)lands, houses and buildings;
(b) farms;
(c) concessions;
(d) trust or family property in respect of which the officer has beneficial interest;
(e) vehicles, plant and machinery, fishing boats, trawlers, generating plants;
(f) business interests;
(g) securities and bank balances;
(h) bonds and treasury bills;
(i) jewellery of the value of ¢5 million [now ¢500] or above; objects of art of the value of ¢5 million or above;
(j) life and other insurance policies;
(k) such other properties as are specified on the declaration form.

Philomena Dzogbo is ‘Borla Woman’ of the Year