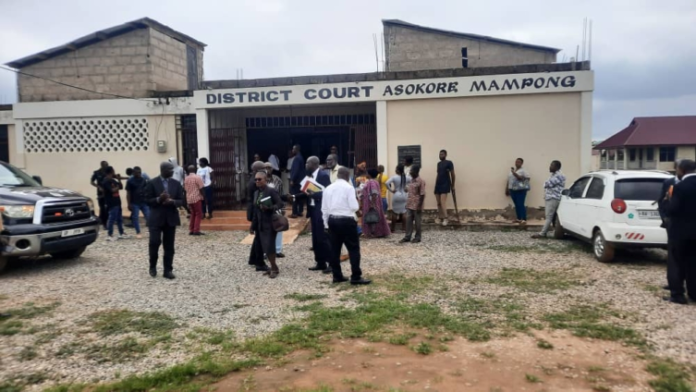 The two suspects in custody over the violent clashes at the Kwame Nkrumah University of Science and Technology (KNUST) have been refused bail for the second time.

This is to allow the prosecution to arrest other suspects and gather enough evidence for the case pending at the Asokore Mampong District Court.

Defense counsel is, however, unhappy with the court’s decision, indicating a likelihood to seek redress at a higher court.

Friends and family of the two were emotional after the proceedings. They had come to court optimistic about securing bail for the two.

Prosecution was in court to present a new charge sheet in correspondence to investigations.

Head of Legal and Prosecution at Ashanti Regional Police Command, ACP Kofi Blagodzie, presented the names of eleven more suspects as well as evidence of the destruction caused by the riots.

“We substituted the charge sheet and presented the court with a new charge sheet so we are on with the matter,” he said.

Prosecution further argued the suspects should remain in custody as investigators go after other suspects.

They argued suspects Daniel Osei Bonsu and Francis Tutu Atuahene will have to report for the examination and work respectively.

Daniel’s counsel, William Asamoah Sarfo, explained that “the student is about to write examination.”

“They have not committed murder, there is no way they are going to interfere with investigations so that is why we were pleading with the court to grant them bail whenever they are needed they will come. If the court decides not to grant the worker bail and his employer decides to sack him then it means we punish him twice. Article 19 (2C), he is innocent until proven guilty so if at the end of the day he is found innocent, what have we done to him?” he quizzed.

He added, “we have another option to go to the high court so we will sit down and decide the next line of action”.

The Asokore Mampong District Court issued arrest warrants for 61 persons suspected to be involved in recent violence on the KNUST campus.

The court agreed prosecution will have to re-appear in two weeks with other suspects in custody for the matter to proceed.

Philippines jail those who refuse vaccine