Ghana gears up for December in GH 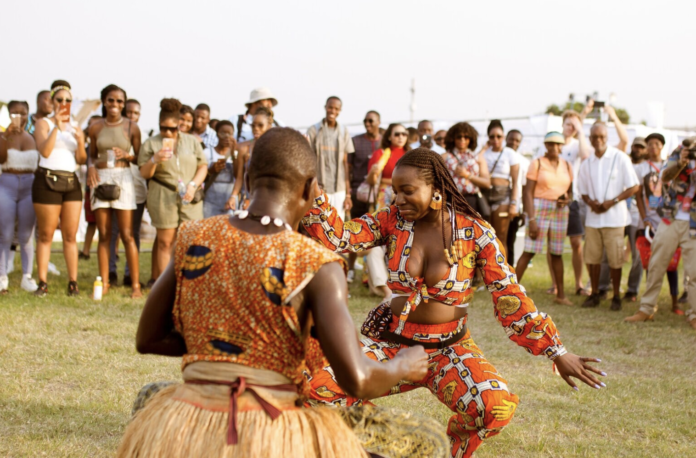 SINCE the celebration of The Year of Return in 2019, Christmas in Ghana has never been the same.

It’s switched to another level as many look forward to ending the year in style.

It has become a time where many anticipate some of the popular events that celebrate the country’s culture through music, fashion, live performances and food, among others.

Touted as one of the biggest tourism projects in Ghana, The Year of Return succeeded in making Ghana one of the favourites, if not the favourite destination for many especially people in the global diaspora community to spend Christmas in the sub region.

12 African Americans explore Ghana… On ‘Beyond the Return’ mission

It afforded people of Black descent to have a reconnection with their African roots and its success called for Beyond the Return in 2020.

However, COVID-19 and its attendant restraints badly affected the celebrations in 2020 but picked up again in 2021 and it seems nothing can slow it down.

This year’s story will be different, thanks to December In GH, a new unique package of events and programmes which continue to make Ghana the preferred tourism destination for Christmas and New Year.

The project was launched on August 4, 2022 by the Minister of Tourism, Arts and Culture, Dr Ibrahim Mohammed Awal, at the La Palm Royal Beach Hotel, Accra.

The Ghana Tourism Authority (GTA) and other key partners, including the Office of Diaspora Affairs at the Office of the President, PANAFEST Foundation and the Adinkra Group of USA, are making earnest preparations to meet the high expectations.

So far, the organisers have endorsed 50 events including Afrochella, Afronation, Saminifest, Little Havana, Arts and Gallery Exhibition, Made in Taadi Concert as well as a number of fashion shows, traditional cultural festivals, and much more across all the regions of Ghana as part of activities to mark the Yuletide.

In an interview with the Daily Graphic, Chief Executive Officer of GTA, Akwasi Agyeman, mentioned that his outfit and other relevant stakeholders were working tirelessly to make this year’s a spectacular global celebration.

He said unlike previous years when the celebrations had taken place in the national capital, this year’s events would be extended to other regions, with each holding its own special events as part of the December in Ghana festivities.

According to him, deliberate plans had been made to widen the frontiers of the festivities, and they were considering holding distinctive events throughout the entire nation.

“We have made sure there is a deliberate plan to have every region in the country host an event to ensure that Ghanaians everywhere have a feel of December in GH.

“Also, we have expanded the time scope and events for this year so people will be spoilt for choice from the variety of events. For example, an event such as Taste of Ghana, which used to be held in one day will now be in two days. Afrochella and Afronation will also be a two-day affair unlike previous years”, he said.

Mr Agyemang told the Daily Graphic that apart from the concerts which would feature both local and international stars, there were a variety of events to make the Christmas and New Year holidays memorable.

“Some of the activities in the offing include culinary bazaars, exhibitions and tours of the nation’s historical landmarks, all geared at promoting tourism in the country. So with some of the big names from both the local and international artistes headlining major events, it promises to be exciting,” he added.

There are already 50 fascinating activities scheduled, and in an appropriate style, famous international stars will perform at some of the major events like Afrochella and Afronation.

The concert will see USA’s Meek Mill, Nigeria’s Davido, Asake joined by the legendary duo P-Square, who bring their high-energy R&B, Hip-Hop, and dance moves to the table.

Ghana’s very own Stonebwoy is on the bill too. And so are the new kids on the block—Kuami Eugene, KiDi, Gyakie and Camidoh.

Nigeria’s Burna Boy and Stonebwoy are the headline artistes.

Kofi Kinaata’s Made in Taadi Concert is equally featuring prominently to explore the unique Christmas culture and celebrations of the people of Takoradi in the Western Region.

“This December is going to be lit. We are going all out and we are very deliberate with the plans to make sure that we have a very good year,” he stated.

With all these major events on the plate, organisers are not leaving any stone unturned when it comes to security.

Concerted efforts are being made to have incident-free celebrations and measures are being put in place to provide effective security.

The Head of Protection Division at the Ministry of National Security, Nadel Fadel Majdoub, said they were working with other stakeholders to make sure that everyone agreed on the necessary procedures to ensure effective security.

Mr Majdoub said the country’s security agencies were also ready to deal with unforeseen criminal activities to ensure the safety of all participants including tourists and celebrities at the various events.

“The sub region is in turmoil and people should look out for suspicious people, those with strange behaviours and ensure that even in our surroundings we check the dustbins, drop box and the rest because there are bad people who can drop things in them and will detonate,” he said

Why we sacked Covid-19 expenditure whistleblower