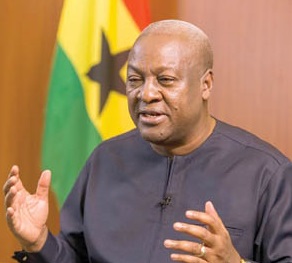 That, he said, was because some of his appointees were complicit in the illicit activity.

“How can you expect him to fight ‘galamsey’ when his own people are involved in it?” he said.

The former President made the statement in an interview on TV3 last monday.

According to Mr Mahama, the President’s own loyalists and party members had been found to be engaging in the activity because the party’s executives had had concessions to illegally mine gold in forest reserves.

“It is close to home and that’s why he can’t deal with it,” he emphasised.

The former President, therefore, said the President had failed in his fight against illegal mining because the government was aware of who the perpetrators of the activities were but had failed to take action.

“They all know who is doing it. The Changfang machines are there, it’s not something that you can put in a handbag so how come you can’t find the machines that are washing all that mud into our river bodies,” he explained.

Touching on the issue of Aisha Huang, Mr Mahama said the country’s territorial integrity was at stake if foreigners were allowed to penetrate without check.

Mr Mahama, therefore, said Ghanaians would feel cheated if the woman who had been accused of illegal mining was let go without prosecution.

“If you’re a Ghanaian and you are engaged in an illegality in China, you’ll face the full rigours of the law and I do not doubt that there are some of our citizens in jail in China,” he added.