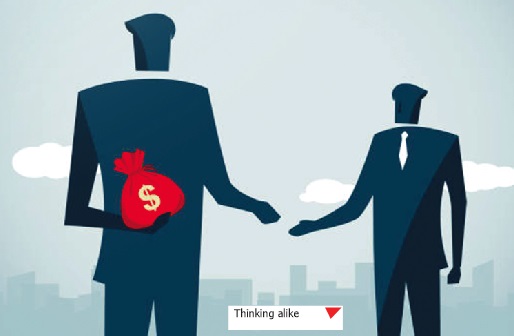 The true antidote to greed is contentment. If you have a strong sense of contentment, it doesn’t matter whether you obtain the object of your desire or not. Either way, you are still content.” — Bill Vaughan

Technological advancement, industrialisation, urbanisation, and modernisation have birthed a materialistic interpretation of happiness and satisfaction, leading to gross discontent experienced by people in relation to their possessions, and this makes them yearn for more by fair or foul means.

This insatiable behaviour in people makes them engage in corrupt acts that inhibit progress in society. Laws have been promulgated to manage the situation, but the more laws are enacted, the more complex the corrupt acts become, and even higher numbers of people engage in such acts because society endorses self-aggrandisement and places the rich (regardless of their sources of wealth) on high pedestal.

Such people are accorded respect to the neglect of less financially endowed upright individuals who deserve the respect and acceptance more. People place too much importance on the gratification of their selfish need for satisfaction that they neglect seeking contentment in daily living, which leads to their participation in corrupt acts.

Unfortunately, the more they attain, the more they crave. Against this background, this article draws attention to the virtue of contentment, which according to Bill Vaughan, is an antidote to greed – an element of corruption.

Contentment, in the context of this article, refers to a state of happiness induced by inner self-satisfaction. Satisfaction, in this perspective, means knowing that one belongs where she/he should be at a particular point in time.

A contented person is satisfied even when all needs are not met but hopes that all will be well no matter the situation or the duration of the waiting period. This article agrees with Tony Gaskins’ assertion that being content does not mean one does not yearn for more, but rather means one is grateful for current achievements and is patient enough to wait for future wins.

Contentment does not mean one should not work hard enough to better his/her lot in life but rather draws people’s attention away from unethical means of satisfying selfish desires.

Contentment deters people from becoming selfish, envious, jealous, covetous, deceitful and greedy. This is because a contented person is not concerned about self-aggrandisement or pleasing people to belong. Rather, the joy and satisfaction derived from the inner being is what makes that individual fulfilled. A contented person does not live above his/her means but “cuts his/her coat according to cloth”.

The benefits of being content in life are numerous. For instance, a contented individual can avoid superfluity-induced waste of resources by maximising the use of resources. Contentment strengthens one’s confidence and efficacy. It promotes good intrapersonal relations because of the inner peace one achieves which results in good interpersonal relations.

Discontented people, according to Brent L. Top, engage in all manner of vices that make them zealously covert worldly materials to satisfy their limitless desires. People of such nature want to be someone or somewhere else rather than their true selves.

They end up exploiting national resources to achieve their selfish desires to the detriment of the common good. As a result, they are never satisfied with what they have accrued because the more they have, the more they want; thereby escalating their desires into a vicious cycle of “it is never enough”.

Resultantly, the feeling of satisfaction and happiness they expect from the results of their corrupt means elude them. The Holy Scriptures quoted below admonish us to be mindful of discontentment which entraps selfish and greedy people to commit corrupt acts that result in sorrow and destruction.

Now godliness with contentment is great gain. For we brought nothing into this world, and it is certain we can carry nothing out. And having food and clothing, with these we shall be content. But those who desire to be rich fall into temptation and a snare, and into many foolish and harmful lusts which drown men in destruction and perdition. For the love of money is the root of all kinds of evil, for which some have strayed from the faith in their greediness and pierced themselves through with many sorrows” (1Timothy 6 – 6 -10 NKJV)

According to the above scripture, sorrow awaits people who exploit others and national resources to their advantage. Considering the benefits one can accrue from being content, it is important for Ghanaians to give contentment a deeper consideration to address corruption for national progress.

The writer is a lecturer at the Ashesi University