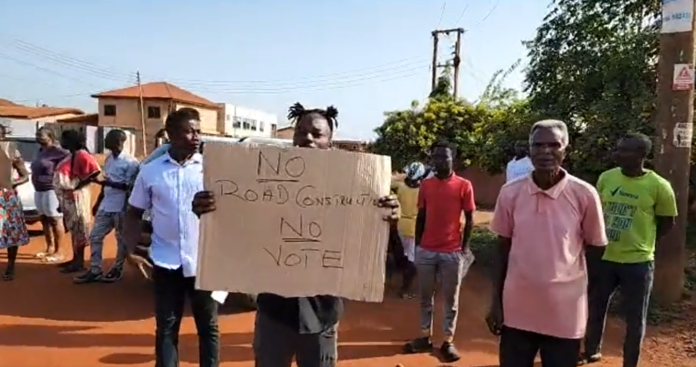 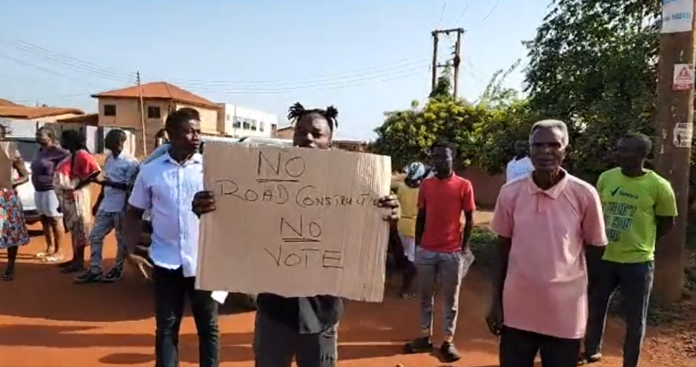 Residents of Tantra Hills, Black Market in the Amasaman constituency have lamented over the deplorable state of their roads.

‘No construction of roads no votes’ was the message by many on People’s Forum, a segment on Adom FM’s morning show, Dwaso Nsem as they shared their sentiments.

Some residents, who spoke to Dwaso Nsem co-host, Kwesi Asempa, said they’ve lost patience for Member of Parliament for the constituency, Moses Anim who has thinks less about the situation.

The situation, they claimed has made it difficult as commercial drivers refuse to travel to certain parts of the area.

Many have become victims to recurring theft in the community during late hours due to the bad nature of the roads.

“I have stayed in Tantra Hills and several years we have been voting for this MP (Moses Anim) but he thinks less about the road in this area which is very important to us. He doesn’t care about us for years now there has been zero development,” one resident said.

Others also expressed their concerns over the lack of public school in the community.

“From Lapaz to this area, there isn’t a single public school you will find.

“If you decide to send your child to a public school then your child will have to travel long distance to attend one everyday, are we not part of this country?” another quizzed

“There is no public school in this area, no government hospital and every taxi driver is hesitant to come here because of the nature of the road, its very bad.” a lady added.

Court issues warrant for arrest of 61 suspects in KNUST violence

Taxi driver arrested for his alleged involvement in several murders