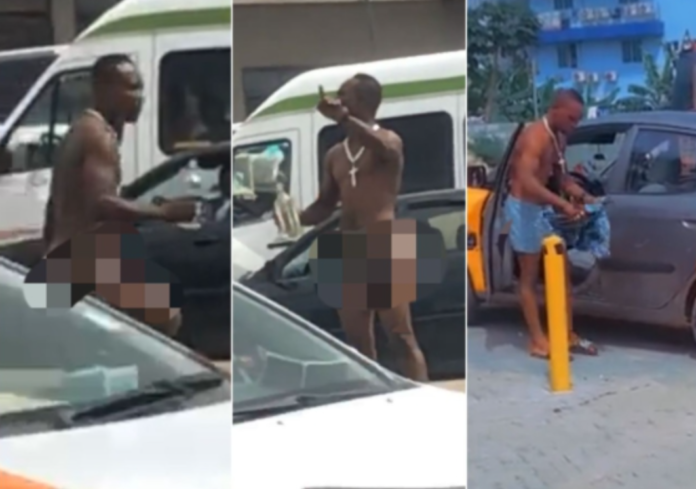 The ramifications of the punitive measure against subscribers who have not re-registered their SIM cards have taken a different turn.

Already, the blocking of SIM cards as announced by the Communications Ministry is biting so hard that, even those who have complied, are feeling the pinch.

Some mobile network subscribers have said they are experiencing interruptions with their phone service, following the sanctions – barred outgoing calls – imposed by the National Communications Authority (NCA).

On Thursday, a taxi driver moved into one of the telecommunications companies in Accra to complain about his predicament.

It is unclear what ensued in the office, but the subsequent events raised eyebrows, per a viral video.

Bystanders were taken aback when the young man stripped naked outside and crossed the busy road with a bottle of what looked like spirit in hand.

On reaching the road’s median, he raise the bottle high, chanted incantations in anger, and crossed back to the office’s car park where his vehicle was.

The process being triggered by critics such as IMANI Vice President, Selorm Branttie, is to ensure that affected users are compensated “for the damage that it has caused them.”

He made these comments on Joy FM’s Super Morning Show on Friday.

The NCA has directed telecommunication companies to begin blocking mobile services to unregistered SIM card users ahead of the September 30 deadline elapses.

According to a statement signed by the Authority’s Director-General, outgoing calls and data services for a sequential batch of numbers will be blocked for two days weekly on a rotational basis.

“MNOs [Mobile Network Operators] shall divide the unregistered SIMs into five batches for the purpose of implementing this punitive measure.

“These measures shall exclude blocking of SMS to give defaulting subscribers the opportunity to initiate registration if they so wish.

“Subscribers who fully register their SIM Cards within the period they have been blocked will only be unblocked by the MNOs after 48 hours to avoid the MNOs tampering with their systems intermittently,” part of the statement read.