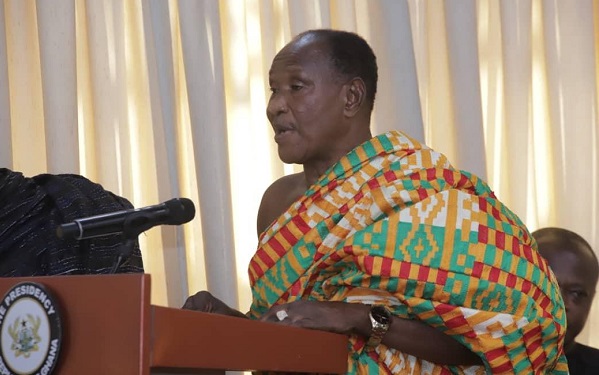 The chiefs and people of Ahafo Region have made a passionate appeal to President Nana Addo Dankwa Akufo-Addo to construct an international standard stadium at Bechem to motivate Bechem United players to excel in their local and international football competitions.

The president of Ahafo Regional House of Chiefs, Nana Ansah Adu Baah, who made the appeal on behalf of the chiefs and people of Ahafo said constructing an international standard stadium at Bechem would also motivate the youth in the region who have skills in various sporting disciplines to develop their potentials for the benefit of the nation.

Nana Adu Baah made the appeal when he led 13 paramount chiefs from Ahafo to pay a courtesy call on President Akufo-Addo at the Jubilee House in Accra .
The visit offered the chiefs an opportunity to have fruitful interaction with President Akufo-Addo about some ongoing projects in the region and the challenges confronting them.

While commending the President for his initiative to construct some sports facilities across Ghana, most of which have become recreational grounds for the youth, Nana Adu Baah, who is also the Paramount Chief of Yamfo Traditional Area, noted that the people in Ahafo were yet to have their fair share of such infrastructure.

Nana Adu Baah seized the opportunity to implore the bankroller of Bechem United Football Club, Mr Kingsley Owusu-Achau, to change the name of his club to Ahafo United with the view to gain a broad supporters base.

That, he said, would motivate the entire region to contribute more meaningfully towards the development of the club.
In response, Mr Owusu-Achau, who was present at the meeting, commended Nana Adu Baah for the proposal and promised to consult the various stakeholders of the club on the issue.

Political parties have roles to play in national cohesion — NCCE

A country without justice, equity won’t have stability, success — Obasanjo