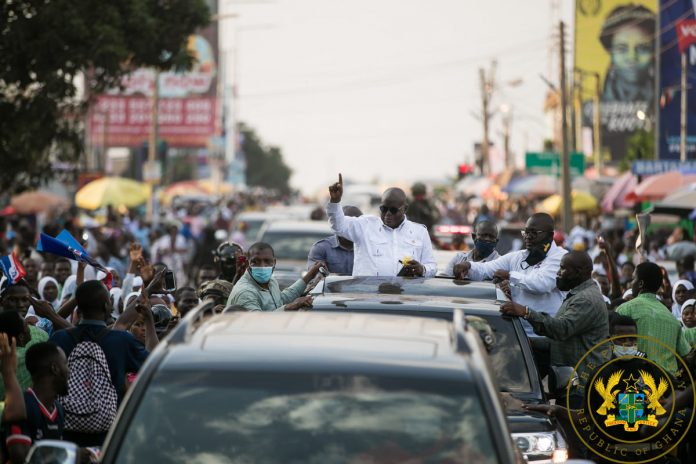 The Zongo Movement for Development, a zongo development advocacy group has touted the zongo achievements of President Akufo-Addo and called for the President to be supported in Monday’s polls to continue with his vision.

At a press conference in Accra on Thursday, the Founder and President of the group, Alhaji Habib Issah Cissey said after initial skepticism over Akufo-Addo’s promise to establish a fund for zongo development, the President has demonstrated “true faith and respect” to Zongos by fulfilling his promise, which the group said has made significant impact on Zongo communities.

“When then candidate Akufo-Addo and his running mate Doctor Bawumia announced their intention to establish a fund to oversee the development of Zongos, many were sceptical, but some people, including our group, gave them the benefit of the doubt and backed the promise,”

“By the grace of Allah, they were elected by the good people of Ghana, and right after their election, the President did not only create the Zongo Development Fund, he demonstrated his seriousness and commitment by making it statutory and adding a whole ministry for Zongo affairs, which he did not even promise.”

The group added: “a non rhetorical vision is one which is backed by law, and the sincerity of President Akufo-Addo and Vice President Bawumia to ensure the bridging of development gap between the Zongos and other parts of the country, is clearly evident by the enactment of an act to establish the Zongo Development Fund.”

“It was a clear statement of intent on the part of the President and his government, and a sincere move to ensure sustainable development.”

Highlighting the impact the ZDF and the Ministry for Inner Cities and Zongo Development has had on Zongos, Alhaji Habib Issah stressed that President Akufo-Addo has laid a solid foundation, which will forever be beneficial to Zongos.

“Now, Zongo development will never be the same again, and the credit goes to no one but President Akufo-Addo and his Vice Dr. Mahamudu Bawumia.”

“As a group which vigorously defended the proposal to establish ZDF way back in 2015, especially against marauding attacks of its feasibility by the NDC, we have religiously followed its progress and its impact on Zongos.”

“We can, therefore, state unequivocally that the Zongo Development Fund and the Zongo Ministry have evidently contributed significantly to the accelerated development in many Zongos across the country, in the areas of infrastructure development, education, vocational training, sports and financial support to small scale businesses.”

“In less than 4 years, the ministry and ZDF have provided infrastructure development projects in many Zongos such as building and renovation of class rooms, clinics, access roads, drainage systems, water systems, toilets, bridges and libraries.”

“In sports, the ZDF, in 4 years has built 10 football and sports complexes in Zongos at New Fadama, Madina, Tafo, Kyebi Zongo, Oda Zongo, Walewale,…….., etc., the

“Again in less than 4 years of the ZDF, Zongos are witnessing the prioritisation of education of our children never witnessed under any government since independence.”

“Many classroom blocks are being built and renovated in many Zongos and the ZDF has also impressively built 37 ICT centres in 37 Zongo communities.”

The biggest statement the Akufo-Addo government has made in the area of education, without doubt, is the full scholarship the government granted 40 brilliant but needy Zongo students to Cuba to study medine.”

The group also stated it was aware the Akufo-Addo government, through the ZDF, has awarded tertiary grants to about 400 students from Zongos and also trained over 2000 entrepreneurs vocational skills.

“Education is fundamental to the development of a people and we are truly excited that the Akufo-Addo government has prioritised the education of our children in the Zongos.”

“This is what development is all about, not the sharing of rice, sugar, milk to community leaders, as was the case in past.”

Concluding, the group said next week’s elections is about comparing records of the two main contenders, records which they said President Akufo-Addo stands out.

“Thankfully, both candidates of the leading political parties, Nana Addo Dankwa Akufo-Addo and John Dramani Mahama have been Presidents before and the 2020 election in the Zongos will be about records of real, visible and sustainable development.”

“President Akufo-Addo and his Vice, Dr. Bawumia, have shown faith, commitment, respect and sincerity towards the people of Zongo and they ought be rewarded with a massive endorsement for more development.”

“We urge our mothers, fathers, brothers and sisters in our Zongo community to give Nana Akufo-Addo and Dr. Bawumia four more years to do more for our country, Zongos and the education of our children.”

The people of Zongos now know between the NPP and the NDC, the party which thinks rice and sugar as development, and investment in education and infrastructure as development.

Indeed the government of Akufo-Addo has demonstrated true faith and respect to Zongo communities and our elders.

As for Vice President Dr. Mahamudu Bawumia, he has been a shining star and a symbol of pride for aspiring youth of Zongo. If he has become so appealing and popular in the Zongos, it is because of his accessibility, humility, excellent relationship with our elders and his amazing generosity.

He has become a role model to many youth, and in shaa Allah, we will remember everything he has done for so many communities.

We cannot turn our back to such a person who is so revered in the country and has made significant impact on the governance of the country, and on many lives in Zongo communities and beyond.

As the popular phrase goes, “one good turn, deserves another”. In our current political situation, we can confidently say one good term deserves another. Therefore, President Akufo-Addo and Dr. Bawumia deserve another term.

The Akufo-Addo government’s faith, respect and sincerity towards the people of Zongo ought be rewarded with a massive endorsement for more development.

We cannot go back to the dark days when the distribution of rice and sugar were seen as development.

We urge our mothers, fathers, brothers and sisters in our Zongo community to give Nana Akufo-Addo and Dr. Bawumia four more years to do more for our Zongos.”

- Advertisement -
Facebook
Twitter
Pinterest
WhatsApp
Previous articleSuspects in Yagaba-Kubori violence to appear in court Dec. 15
Next articleSupreme Court throws out case of former MPs demanding over ₵230k each from government

14 arrested over murder of chief, 2 others at Krachi

Minister reportedly collapses after his sack