Why majority regional winnings do not decide Ghana’s presidential elections 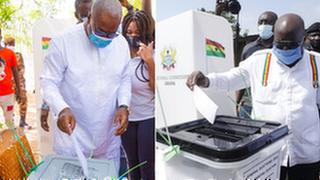 For a candidate to win a presidential election in Ghana, that candidate needs to obtain over 50 per cent of the total valid votes cast, according to Article 63(3) of the 1992 constitution.

It states that a person shall not be elected as president of Ghana unless at the presidential election the number of votes cast in his favour are more than 50 per cent of the total number of valid votes cast at the election.

Furthermore, Article 63(4) and 63(5) ensured that where there were more than two candidates in a presidential election and no candidate obtained more than 50 per cent of the valid votes cast, there would be a second election after 21 days of the previous election for the two candidates with the two highest number of votes to determine the winner.

Winner not determined on a regional basis

From the above, a winner is not determined in Ghana’s presidential election based on the majority of regions won.

The constituency and regional demarcations in Ghana are such that the total number of registered voters in each region differs.

Some constituencies and some regions have more total registered voters than others.

In some cases, it takes a combination of the total registered voters of two or three or four regions to match up to one region.

This means that, it is possible for one political party to win majority seats in Parliament but may not win the presidential election when all those constituency results are put together at the national level.

The Electoral Commission (EC) had as of Wednesday morning [December 9, 2020] released certified results from seven regions.

A total of the results from the seven regions are as follows:

Provisional presidential results released by the Ashanti Regional office of the EC from its collation centre in Kumasi but yet to be certified at the national level shows that the NPP’s Akufo-Addo had 1,795,824 votes against NDC Mahama’s 653,149.

The Ashanti Region results if certified by the EC’s Presidential Election Returning Officer, will see Akufo-Addo overtaking Mahama and gain the lead with:

From the certified results, the NDC’s John Dramani Mahama’s total votes in Volta and Oti regions combined is 787,529.

The Bono East Regional Director of the EC has also released the regional collated results minus the Techiman South constituency because of a dispute.

On Tuesday, December 8, 2020, candidate John Drama Mahama of the NDC claimed that his party had won a Parliamentary majority of 140 seats out of the total 275 and had also won the election in 10 regions out of the total 16.

This, he claimed was translating to a win for him in the presidential election.

Supporting that notion, the national executive of the NDC supported that argument and insisted that once they have won regional majority, it will translate into an overall win for the NDC.

The NDC’s General Secretary, Johnson Asiedu Nketia and Director of Elections, Elvis Afriyie Ankrah reiterated this notion at various press conferences after the close of polls on Monday evening.

In the 2008 Elections, a similar argument was made when in the first round of the December 7 elections, the NDC won a Parliamentary majority but was behind the NPP’s Nana Addo Dankwa Akufo-Addo who led in the presidential election but was not declared winner because he did not obtain the over 50 percent from the total valid votes cast.

The NDC in the 2008 election won majority votes in eight regions in the then 10 regions with the exception of Ashanti and Eastern where the NPP won.

Even with just the two regional wins, the NPP’s candidate had the majority votes at the national level but could not obtain the over 50 percent votes.

The election went for a second round on December 28, 2008 between the two leading candidates, Nana Addo Dankwa Akufo-Addo and the late John Evans Atta Mills where Atta Mills won the second round and became president.

The EC on Wednesday dawn said it has received results from 14 regions and out of that, seven of them have been certified.

The remaining seven results are going through the certification process and would be released immediately that is done.

The Chairperson of the EC, Mrs Jean Mensa mentioned the two remaining regions where results were still outstanding as Bono East and Northern.

The seven regions where the results had been certified and released were Volta, North East, Central, Ahafo, Upper West, Oti and Bono.

The EC is expected to declare the results of the presidential elections and clarify who has won parliamentary majority before the close of day, Wednesday, December 9, 2020.