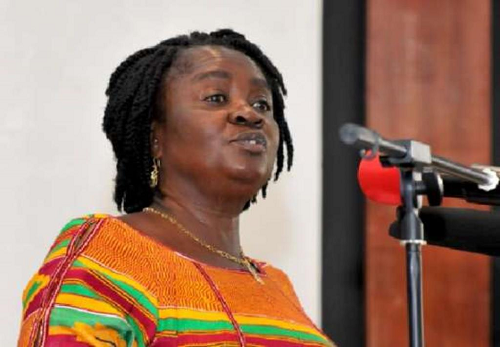 The running mate of the presidential candidate of the National Democratic Congress (NDC), Prof. Naana Jane Opoku-Agyemang, has encouraged the electorate to go out in their numbers and vote for “the trusted and honest” John Dramani Mahama on Monday.

She said the NDC was fighting for the soul of the country and the people could not afford to let the party down.

“We are voting to save our country, we are voting for the future of our children and children’s children; it is in your own interest to do the right thing,” she said.
Prof. Opoku-Agyemang made the call at a town hall meeting organised by the party in Cape Coast last Thursday.

She asked the Electoral Commission (EC) to do what was right to instil confidence in the people.

The running mate said the NDC’s agenda for jobs and accelerated development held hope for the youth of the country.

“Our resources must not be given to a few,” she stated.

Prof. Opoku-Agyemang said with all of the issues of corruption and underdevelopment in the past four years, it was certain that the NDC would win the elections.

She said the next NDC government would deal decisively with the issue of corruption.

The National Chairman of the NDC, Mr Samuel Ofosu Ampofo, called on the EC to allow persons without face mask to vote.

“My encounter with most people in the rural area revealed that many did not believe that the virus is real and many did not even have the masks,” he said.

He reiterated that it would be in line if the EC provides masks at all polling centres to ensure a smooth process.

Prof. Opoku-Agyemang said the EC had the key mandate to ensure a smooth electioneering process and urged that they delivered their mandate without any interference.

“It would be in the interest of the Electoral Commission to ensure a smooth process on December 7 and ensure a peaceful elections.

She also urged all to go out and vote peacefully to ensure that the country continued to enjoy peace.

The National Communications Officer of the NDC, Mr Sammy Gyamfi, said Ghana’s present state was one that could be described as a monarchical state due to instances of nepotism in the government.

He reiterated that the governing process must be felt by all citizens and not just the family and friends of the President.

Speaking on corruption, he said it had been on the rise in the country as a result of nepotism, and required the efforts of committed leaders who would fight it devoid of political interference.

He noted that the ruling party “sees no evil and hears no evil when it comes to corruption.”

Mr Gyamfi said the fight against corruption required efforts from a committed leader who was ready to fight without a political lens.

“Mahama was not perfect but he was courageous to prosecute all found to have engaged in corrupt practices,” he stated.

The Member of Parliament (MP) for Asunafo South, Mr Eric Opoku, indicated that cocoa farmers and fishers would be signed onto an instituted pensioners’ scheme to assist individuals in the field who were not in active service.

He said the present condition of fishers and cocoa farmers who were no longer active in the field was unpleasant, adding that the said pensioners’ scheme when rolled out would help resolve the issue.