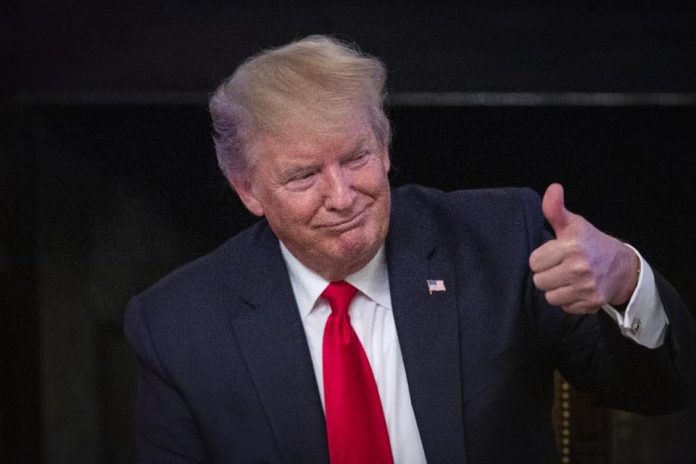 A recently conducted poll by a United States (US)-based media house has shown that most participants do not want President Donald Trump to concede defeat.

According to the poll by Newsmax, out of 192,774 people who voted, 98.9% (190,593) voted NO meaning they don’t want President Trump to stand down and acknowledge he lost the election to Democratic candidate Joe Biden.

Those who said President Trump should admit defeat were a meagre 1.1% which translated to 2,181 votes. The poll caught the president’s attention and he shared it on Twitter with a message indicating he plans to continue pushing his bid of overturning Biden’s win in court.

Newsmax now seems to become one of Trump’s supporters’ favourite channel. The president and his followers have been fans of Foxnews but things appeared to have gone sour shortly after the election when the news outlet seemed to acknowledge Mr Biden was winning the poll. Meanwhile, some members of the Republican Party have continued to contest the result of the US presidential election which projected Democratic candidate, Mr Biden as the winner of the poll.

…fight, and I believe we will prevail! Nevertheless, in the best interest of our Country, I am recommending that Emily and her team do what needs to be done with regard to initial protocols, and have told my team to do the same.

According to Bloomberg, a group of Pennsylvania Republicans has filed an emergency lawsuit seeking to block certification of the election results in favour of Mr Biden in the state. The petition was filed in the state ahead of the Monday, November 13, deadline for Pennsylvania counties to certify their voting results.

I’ve long said that America leads not by the example of our power, but by the power of our example.

I am proud to put forward this incredible team that will lead by example. pic.twitter.com/mz9twkgcil

A President Trump ally, United States Representative Mike Kelly, is reported to be among the plaintiffs seeking to stop election certification in the state.

Prophet TB Joshua’s message to Nigerians ahead of June 12 –

Partey: I have to get back to my best