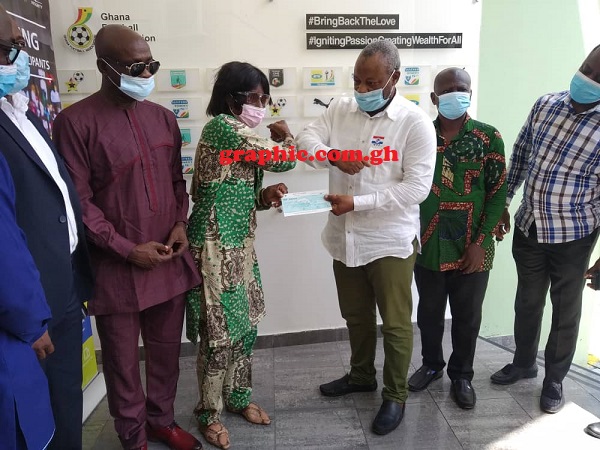 The Ministry of Youth and Sports (MOYS) has presented a cheque for GH¢1,000,000 to the Ghana Football Association (GFA) as the first tranche of payment to offset the expenses of the 18 Ghana Premier League clubs incurred during the COVID-19 pandemic.

At a ceremony to hand over the cheque on Friday in Accra, the Communications Consultant of the MOYS, Mr Ahmed Osman Halid said the presentation follows an appeal made to President Akufo-Addo by the GFA after the MOYS’ directive for all games to be played behind closed doors.

“After the Ministry of Youth and Sports directive that all games be played behind closed doors, the FA through its President, General Secretary and other ExCo members had an engagement with the Minister and said the Ministry or government should find a way of supporting the clubs to meet their expenses,” Mr Halid said.

“The engagement went on very fine and the government has agreed to assist the clubs and when we say all the clubs, we mean the Ghana Premier League clubs, the National Women’s League (NWL) clubs, the Division One League (DOL) clubs and the country’s representatives in the Confederation of African Football’s (CAF) inter-club club competitions”.

He said the Ministry would in the coming weeks make similar presentations to the other beneficiaries including the members of the NWL, DOL and the CAF inter-club representatives.

In brief comments after Madam Habiba Atta Forson had received the cheque on behalf of the Executive Council of the GFA, the GFA President, Mr Kurt Okraku said the Association was extremely grateful to President Akufo-Addo for the “amazing gesture”.

He also lauded the Minister of Youth and Sports, Mr Isaac Kwame Asiamah for playing a pivotal role in transmitting the GFA’s request to the Presidency.

He said: “We (the GFA) have been working on this for so long, we have had numerous meetings and finally His Excellency (Akufo-Addo) has spoken and I think this would go a long way to cushion our Ghana Premier League clubs during this challenging period of COVID-19 when the clubs have been asked to play behind closed doors.

“We will make due with what we have been given, we cherish this and we look forward to receiving the second tranche and we are very positive about the future of our sport”.

Mr Okraku said his outfit was keen on using football to educate the public about the upcoming elections because football can only be enjoyed in a peaceful environment.

“We look forward to using the football platform to educate the Ghanaian populace about the upcoming elections. It is dear to our heart, it is important that we survive this period in order to be able to enjoy our football.

“We wish the entire country the best, vote peaceful, go home and enjoy your football”.