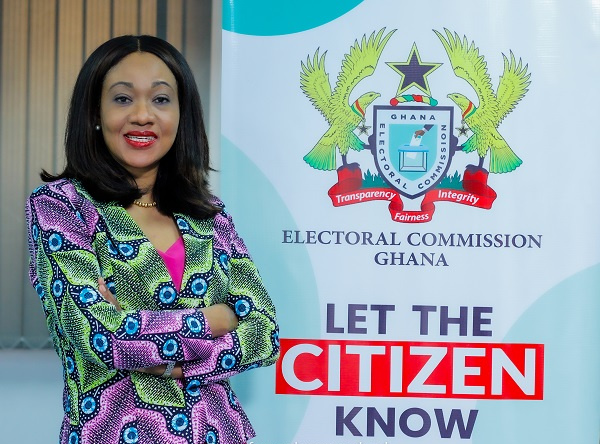 The Electoral Commission (EC) has said it expects a near 100 per cent voter turnout in today’s special voting exercise.

“We expect a near 100 per cent turnout and are confident that the outcome will be peaceful, credible, transparent and orderly, God being our helper,” the Chairperson of the EC, Mrs Jean Mensa, told the media in Accra yesterday.

Addressing the latest edition of the ‘Let the Citizens Know’ series, Mrs Mensa also released the final voters register for the 2020 general election, in which 17,027,641  people have been certified to take part in the polls.

Declaring that all was set for today’s special voting, the EC Chairperson said polling officers had been recruited and trained, and that all materials had been distributed in sufficient quantities and biometric verification devices (BVDs) prepared and deployed.

“In total, 109,557 people, made up of security persons, media people and staff of the EC, applied to take part in the exercise in the 275 constituencies. It is instructive to note that this is the highest number the commission has recorded for special voting in its history,” she said.

Significantly, she said, this year, the EC provided the special voting list to representatives of the institutions whose staff applied to vote in the exercise.

It was, however, unfortunate that some of the applications received for special voting could not be considered as a result of their late arrival and the freezing of data after processing, she said.

Mrs Mensa urged the public to disregard information on social media that the EC had prevented the security agencies from registering.

“Every officer who applied on time and provided the correct ID card number was duly registered. Unfortunately, we rather had an issue with our media partners who have collaborated with us all this while. There were some discrepancies regarding the list submitted by the GJA. The soft copy of the list was different from the hard copy, which contained more applicants. Unfortunately, that was not made known to the EC’s team.

“As such, only the names in the soft copy reflected in the special voting list. The commission regrets this and wishes to assure the GJA, the NMC and journalists in general of our support for their efforts. To mitigate this, the EC has instructed its field officials to give preferential treatment to media personnel who possess the accreditation cards of the commission,” the chairperson said.

It indicated that the Greater Accra Region had the highest number of voters: 3.53 million, followed by the Ashanti Region, which has about 3.012 million voters.

On the other hand, the North East and the Savanna regions were home to the lowest and the second lowest number of voters, made up 289,529 and 298,404, respectively.

She said the EC had certified about 542 voters to vote through manual verification.

Beyond the over 17 million names in the voters register, she said, 830 names were found to be missing, but they would now be allowed to vote after their names had been discovered through a thorough examination.

She said the affected voters were in 38,622 polling stations across the country

The EC Chairperson said the commission was enjoined by the Constitutional Instrument (C.I.) 127 to publish the certified copy of the final voters register in a manner determined by the commission.

Consequently, she said, it had elected to make the register available in two electronic formats to allow registered voters to “seamlessly check their details ahead of the elections”.

She emphasised that the final register had been uploaded onto the commission’s website for the general public to verify their names.

Mrs Mensa indicated that voters could also use the USSD *711*2020# to check their details on the electoral roll ahead of the polls, explaining that the usage was free of charge.

“The publication of the final voters register in these two electronic formats will enable voters to ascertain their polling station details to enable them to go through a seamless voting process on Election Day. We entreat persons who have issues with their registration to contact the nearest district offices of the EC across the country for immediate remedy,” she said.

The EC Chairperson said the final register showed that about 7,890 people had engaged in multiple registration, totalling 15,860.

Woman tells husband her pastor is sweeter, powerful in bed than him