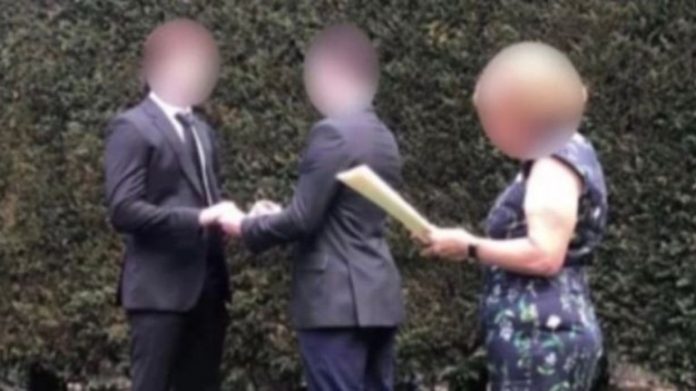 Two schoolboys tried to stage a fake wedding so they could hold a huge end-of-year party.

The students from Sydney, Australia, wanted an after party for their Year 12 formal.

Due to Coronavirus restrictions, the number of party goers would have been limited to just 30. But the boys realised weddings are allowed up to 150 guests.

So the two teenagers from Sydney Grammar School decided to throw a fake wedding ceremony between them to have more people together, according to 7NEWS.

By disguising the after party as a wedding it would have meant they could hold the huge celebration they wanted.

But their plot unraveled after a picture of the pupils apparently swapping vows was shared on social media.

The photos quickly went viral and their parents heard of the plan and quickly raced home to shut the party down.

They reportedly only heard about the plot when a neighbour texted them to congratulate them about their son’s wedding.

In a statement to The Daily Telegraph, the parents claimed it was “clearly a silly teenage idea”.

The statement said: “No legally binding ceremony took place and we shut down the planned private celebratory event as soon as we found out about it, and thankfully, nobody was put at risk.”

Both students have since apologised for the prank.

No fines were issued to the boys as no party went ahead in the end.