Newsday Ghana
HomeGeneral NewsSame-sex couple finally gets their dream wedding after being turned down by...
General News 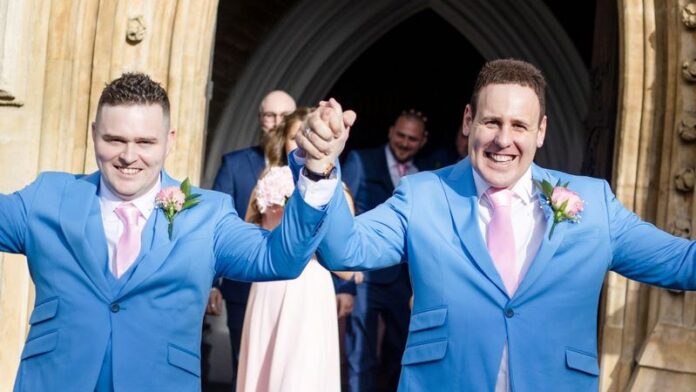 A same-sex couple who said they were turned down 31 times to be married in a church has finally tied the knot.

On the 32nd time of calling churches in the south east Shane Yerrell, 39, and David Sparrey, 30, were finally given the green light.

The pair, from Waltham Abbey, Essex, had the ceremony at Wansted United Reformed Church in East London, last month, the Bristol Post reports.

Originally, the loved-up pair had made the decision to wait to marry but, a family health issued changed their minds and they began looking for somewhere for their special day.

Shane, who is deputy mayor for Waltham Abbey and a councillor for Epping Forest, spent “up to 15 hours” on the phone trying to find a venue.

He said: “Honestly, I’d all but given up. But when I spoke to Reverend Tessa I was literally shouting with joy and jumping round the room. David didn’t believe me.

“When we met Tessa she said, ‘I can see you love each other, love is love’. It was the most amazing feeling.

“She said, ‘Everyone deserves to marry the person they love’ – and she’s right. The day was so special. That church was a light at the end of a tunnel. They are so brave and we will always be so grateful to them.

“It really wasn’t easy but it was more than worth it all. We thought it would never happen. It was like [the churches] were all reading a script – ‘We’d love to, but no’.”

Shane and David are both Christians and met through a mutual friend in 2014 and were officially a couple just two years later.

David, an electrical engineer, popped the question while they duo were on a family holiday in Crete.

David walked down the aisle first with his mum, Dawn Bond, 56. And Shane was given away by mum Maria Markham, 58, and grandmother Iris Markham, 79.

More than 100 guests joined them for their special day, with an extra 40 joining them at their reception at Waltham Abbey Town Hall.

David added: “It was a day I’ll never forget. We were surrounded by so much love on the day. It was the perfect wedding.

“We were over the moon when the church agreed to marry us. Everything felt complete. I had hoped Shane’s patience and determination would pay off and it did.”

“It was so moving, overwhelming,” Shane explained.

“I could hardly believe it. It really was the most special moment.

“We had done it and we hadn’t had to settle for something we wanted less. I’m delighted we’re part of that church’s history, we’ve made friends for life.

“Gay people just don’t think it is possible, but if you are a same-sex couple and you want to get married in a church just don’t give up. I think a lot of churches are frightened of a backlash – people saying it isn’t what the bible says.

“But I think they could find a way of interpreting that for themselves and making it possible, after all, love is love no matter whether you’re gay or straight.”

- Advertisement -
Facebook
Twitter
Pinterest
WhatsApp
Previous articleMy integrity, my most cherished asset in life – I won’t allow anyone to ruin it
Next articleWorld Cup: Final Black Stars squad solely my decision not GFA

Police Inspector and wife die in accident at Akuse

Alpha Lotto Is Not Among Our Legal Digital Lottery Operator – NLA