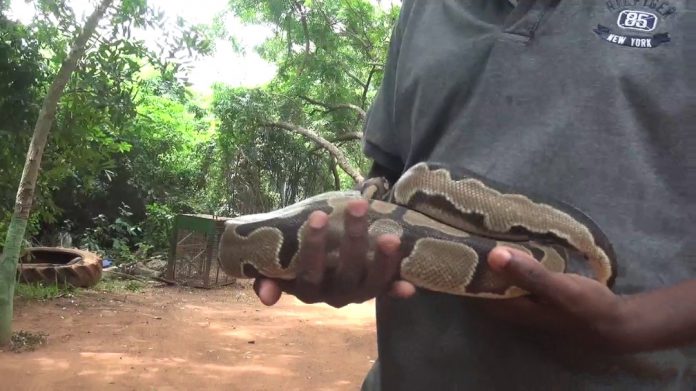 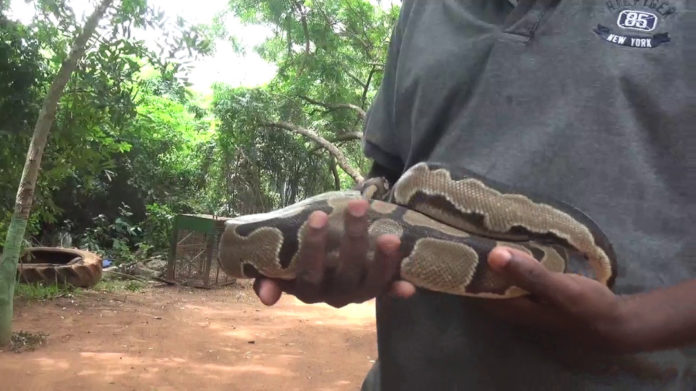 The Ghana Statistical Service reported that 42,000 employees suffered job losses while 700,000 workers had their working hours reduced as a result of the Covid- 19 pandemic. The trade and manufacturing sectors including exporting firms pegged revenue losses at 115 million cedis.

When the COVID-19 pandemic broke in Ghana in early March 2020, its shock swept through all sectors from manufacturing to the services sector.

Those who trade in ball pythons in Ghana may not have been captured in this big data by the Ghana Statistical Service, but, the few in the business say the pandemic has been impactful.

“It’s been a challenging period for many of us, some ball python traders like me are holding on our stock,” Tetteh Oman, Secretary to Ghana Wildlife Exporters Association said.

According to him, they are waiting for the right time to export his stock of ball pythons albeit the fact other exporters are taking the challenge of satisfying the high demand for ball pythons in Europe, United States and other Western countries.

“The airlines have opened but traffic is irregular. Some health certificates issued for ball pythons are for three days. You risk having some of the reptiles die before reaching their destination,” he observed.

The Secretary of the Ghana Wildlife Exporters Association said for many ball python breeders like himself, it’s now more expensive breeding the reptiles.

He expressed the hope of getting back on track to regular exports in December and January, adding that he was able to ship some of his ball pythons during the Covid-19 pandemic.

For now, he added, many of them are surviving on their savings and have had to lay off some staff to keep the business afloat.

On reports suggesting Ghana is operating as a regional trade hub for re-exporting ball pythons from Benin and Togo, Mr Oman noted that using Ghana as a transit point for smuggling the reptiles to abroad because of the rigorous documentation at the airports makes it unattractive or near impossible.

The Business Planning Manager of the Wildlife Division of the Forestry Commission, James Oppong, indicated that the ball python trade has not been affected much by the covid-19 pandemic.

“If you look at the data, in 2018, about 16, 000 live ball pythons were exported from Ghana, in 2019, a little over 11,000 of the reptiles were also exported, though there was a drop in the numbers, the global pandemic did not take a significant toll on the trade,” he explained.

He noted that although the Wildlife Division has not compiled data of exports for live ball pythons exported for 2020, he can confidently say it hasn’t been affected adding that “there was a little drop.”

He observed that in the heat of the scourge, airlines were operating fully so ball pythons weren’t exported as expected.

Mr. Oppong disclosed that there was still high demand for the reptiles during the covid 19 pandemic because many of customers were presumed to be bored.

Giving an insight into permits that were issued by the division, he indicated that for capture permits, “the figures are not significant, only three percent of the exports are taken from the wild, 93 are from the ranch.”

He explained that most of the species that are exported are from the captive breeding. According to him, premium is not placed on whether the exporters are exporting more female or male ball pythons.

“We are interested in the regular inspections of the ranches of the ball python breeders and whether they’re abiding by the law. Before anyone exports the reptiles, they need capture permits and need to send ten percent of the captive breed pythons to the wild,” the Business Planning Manager of the Wildlife Division of the Forestry Commission said.

He admitted that though they do not do proper monitoring to ensure the breeders send 10 percent of the captive ball pythons to wild, they are confident they players in the trade are doing the right thing.

On what threats facing ball pythons in Ghana, he pointed to habitat destruction and bad farming practices.

He added that re-exports of ball pythons through Ghana from Togo and Benin are either minimal or non-existent.

On her part, the Wildlife Campaign Manager at the World Animal Protection, Edith Kabesiime, observed that despite the COVID 19 pandemic, there was the desire to exploit wild animals for profits.

She expressed worry over the reality that those involved in the ball python trade do not appreciate it’s a risky business.

“If you would recall, there were speculations, that snake could have been the originator of the COVID 19, but, because there is no evidence backing this claim, it makes it continuous trade risky,” she added.

Madam Kabesiime observed while the pandemic was still raging, business continued as usual but there is not much awareness of these risks.

“Snakes can carry host of pathogens like bacteria, virus and all sorts of parasites which could actually place lives of people in danger. Ball python could be a source of pandemic,” she said.

She expressed concern much is not being done by local authorities to educate the community as well as the consumers of reptiles.

The Wildlife Campaign Manager at the World Animal Protection emphasized that the main source of ball pythons is the wild, despite the fact that these ball python are born in captivity the parent stock is collected from the wild.

She was unhappy that all three major source country of ball pythons – Togo, Ghana and Benin – do not have information on the population of the ball pythons.

She added that information is also missing on mobility and mortality rate of ball pythons adding that “even exportation of ball pythons from Ghana to its destination, or in breeding facilities is not available.”

She stressed that data is key in establishing whether the wild population is being impacted or not, insisting that it’s necessary for these data gaps to be filled.

On whether government should regulate the ball python trade, Wildlife Campaign Manager at the World Animal Protection answered in the affirmative.

She said the ball python is considered sacred in many countries; but, the species are threatened with extinction.

“Ball python is considered as meat and delicacy, and now ball pythons are reared for farming, traditional medicine and cultural practices which are not properly monitored,” she said.

Madam Kabesiime argued that if you have a population that exploits animals like ball pythons, then its affects the species.

She pointed out that Ghana has a Wildlife Preservation Act which classifies ball pythons as one of the classified protected animals in the country.

She however noted that the laws protecting wildlife are outdated and archaic.

The Wildlife Campaign Manager at the World Animal Protection advocated that the current law is not effective enough given that the law dates back to 1960s.

She called for reforms in the law supporting customs officials to deal with trafficking of ball pythons are curbed.

She said Ghana is signatory to protection of flora and Fiona making it expedient for the country to amend it laws to make sure its aligned with international laws to safeguard the sustainability of the ball python.

Madam Kabesiime said it seems Ghana has become a transit for trafficking of ball pythons noting that breeders in Benin and Togo re-export their stock using Ghana as transit point.

“Ghana can be classified as a key hub for ball python trade but unfortunately the country lacks the mechanism to counter the cross border trade.

She said if the country “can’t protect individual animals, then they cannot protect species as well.”

You did ‘sakawa’ job – Kaaka’s family on Ejura Committee report –