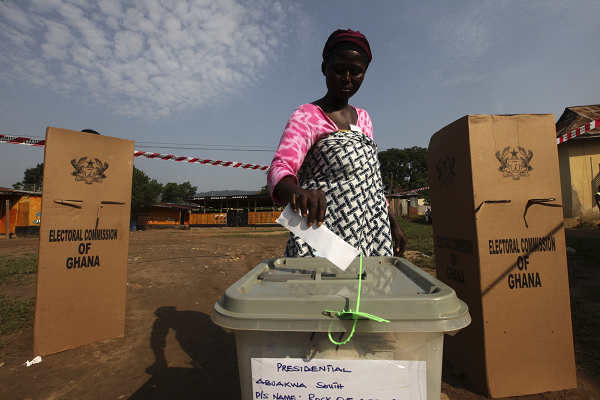 As the curtains draw down on the electioneering towards the December 7 general election, the political parties have projected higher voter turnout to propel them to victory.

The New Patriotic Party (NPP), the National Democratic Congress (NDC), the Convention People’s Party (CPP), the All People’s Congress (APC), the People’s National Convention (PNC), the Ghana Union Movement (GUM) and the Great Consolidated Popular Party (GCPP) are all looking forward to massive participation of voters in the elections.

The NPP expects a voter turnout of between 75 and 80 per cent in this year’s polls, based on the enthusiasm that surrounded the voters registration exercise.

“When new voters registration takes place in election years, people turn up in high numbers to vote,” he said.

“We are embarking on retail campaigns, especially in our strongholds, to whip up interest in the elections, so that our supporters can turn up massively to vote for the NPP,” he added.

Mr Mac-Manu appealed to voters to be peaceful on Election Day and avoid acts of violence and vigilantism.

Sharing his views with the Daily Graphic, the Communications Director of the NDC, Mr Kakra Essamuah, said although he would not bet on a percentage turnout, heightened tension during the voters registration exercise raised expectations that people would turn out to vote for the NDC.

“We expect a higher voter turnout across the country, especially in our strongholds, to vote for the NDC for an emphatic victory,” he said.

“The Volta Region has seen how the NPP tag them as foreigners and so we expect them to register their protest on Election Day with a massive turnout,” he added.

A serial participant in Ghana’s elections since 1992, the PNC, which is campaigning on the message of providing prosperity for every Ghanaian, hopes to capitalise on the disappointment of voters in the two major political parties to spring a surprise.

The presidential candidate of the party, Mr David Apasera, who is counting on a 75 to 85 per cent voter turnout, said he was confident of victory based on the groundswell of support the party was enjoying across the country.

“It is no longer the bigger parties that matter; it is what the PNC is bringing on board that matters because the party has a lot to offer Ghanaians,” he said.

The CPP also expects a turnout of more than 75 per cent.

Its presidential candidate, Mr Ivor Kobina Greenstreet, who is campaigning on the slogan: “High tension electric shock”, said he was sure of springing a surprise in these elections.

“We are energising our supporters and our campaign is exciting. Many people are disappointed because they feel democracy is not delivering the kind of results they expect.

“The electric shock on the high tension is coming for the NDC and the NPP in these elections,” he added.

The APC hopes to dislodge the NPP and the NDC from frontline politics and become the third force.

The presidential candidate of the party, Mr Hassan Ayariga, said he expected a higher voter turnout in the elections.

He said the party was galvanising its supporters to turn up in their numbers to vote for the APC, adding: “We certainly hope to drop one of the major parties from the top spot and become the third force in frontline politics.”

The National Chairman of the GUM, Dr Maxwell Awuku, said the desire for change would push voters to turn up in large numbers to cast their ballots.

Although he would not put a figure on his projection, he expressed the hope that the party’s message had been well received, and that its supporters would turn up on Election Day to effect the needed change.

“Our campaign has so far been very terrific and so we expect voters to turn up to help us make that change possible,” he said.

Sharing his perspective, the presidential candidate of the GCPP, Dr Henry Herbert Lartey, said he was confident of a higher turnout that would lead to his party’s victory.

Dr Lartey, who is campaigning with the watchword “Domestication”, said victory would go his way on December 7, judging from the rousing welcome he had received on the ground.

“It looks like victory will come my way based on what the people are telling me. I hope they will vote for me on Election Day,” he said.

Twelve candidates will be on the presidential ballot paper. They are President Akufo-Addo of the NPP, former President John Dramani Mahama of the NDC, Mr Christian Kwabena Andrews of the GUM, Mr Greenstreet of the CPP, Madam Akua Donkor of the Ghana Freedom Party (GFP) and Dr Lartey of the GCPP.

The rest are Mr Ayariga of the APC, Mr Kofi Akpaloo of the Liberal Party of Ghana (LPG), Mr Apasera of the PNC, Ms Brigitte Dzogbenuku of the Progressive People’s Party (PPP), Nana Konadu Agyeman Rawlings of the National Democratic Party (NDP) and Mr Asiedu Walker, an independent candidate.

Coronavirus: Check out the country that’s rejecting the vaccine