People wanted to steal from GCB during fire outbreak – GNFS 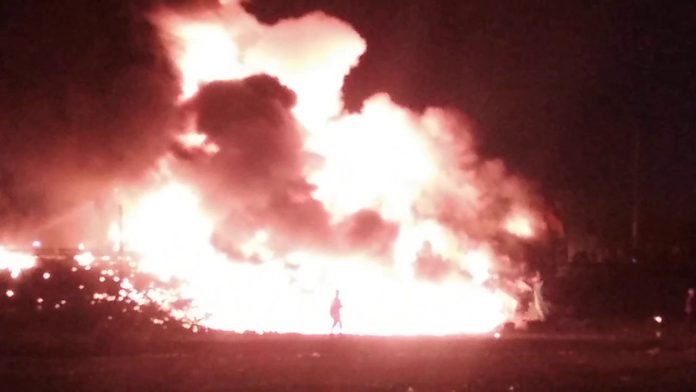 Traders and pedestrians who trooped to the GCB Bank Liberty House branch in the Central Business District of Accra wanted to break into the building and steal money, the Ghana National Fire Service has disclosed.

The Service observed that because the traders and pedestrians wanted to loot, they got furious when its personnel called police to come and help them in their operations.

The fire gutted parts of the Bank’s branch at Kantamanto in Accra on Saturday, November 28.

The cause of the fire, which started on the first floor of the seven-storey building, is still unknown, according to the Fire Service.

As of midday of Saturday, there were about six fire tenders at the scene as personnel tried to keep the fire from spreading.

Arriving police officers barricaded the road leading to the area.

The disaster has compelled management of the branch to close business on Monday.

A statement signed by the Head of Corporate Affairs, Emmanuel Kojo Kwarteng, on behalf of Managing Director of the Bank Kofi Adomako, said the closure is to allow for a thorough assessment of the extent of damage caused by the fire.

Customers of the bank have been advised to visit Kantamanto, Okaishie, Makola, Republic House, High Street, Boundary Road, Ministries and any GCB Bank Branch of their choice or make use of alternate channels including internet banking, GCB Mobile banking, ATMs and G-Money Mobile Wallet.

Reacting to the accusations that the Fire Service got to the fire scene late after a distress call, the Public Affairs Director of the Service, Ellis Robinson Okoe, explained that “they were not satisfied because we called in the police to help”.

“They wanted to steal but we called in the police and that is why [the traders and pedestrians] are accusing us we did not get there early.”