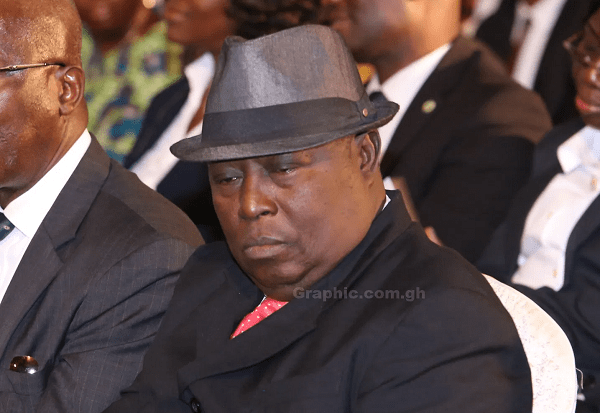 While some said they were not surprised with his resignation yesterday, in view of his defiant stance, others criticised him for the action, with others agreeing with his position that he was frustrated to take that action.

As of press time, multiple sources from the governing New Patriotic Party (NPP) said they were waiting for a press statement from the government before responding to Mr Amidu’s resignation.

The NDC Member of Parliament (MP) for Tamale Central, Mr Inusah Fuseini, said he was not surprised at Mr Amidu’s resignation, as he had predicted in advance that his appointment would eventually lead to his resignation.

“In 2017, when Mr Amidu was appointed, I said the President was holding the tail of a tiger, and that he could not risk leaving it because if he did, the tiger would turn and consume him,” he told the Daily Graphic’s Nana Konadu Agyeman.

The Ranking Member of the Constitutional, Legal and Parliamentary Affairs Committee said he had also predicted that the SP would be frustrated unduly and that could eventually cause him to resign.

True to his prediction, Mr Fuseini said, in 2018 Mr Amidu complained bitterly about the manner in which government officials had been frustrating and refusing to cooperate with him since his appointment.

Besides such frustration, he said, the SP had been denied his budgetary allocation, and that all the money advanced to his office came from the Office of the President through government machinery.

According to him, the fact that the President even appointed Mr Amidu, a member of the opposition NDC, was a sign that he (President) had good intentions by setting up the Office of the Special Prosecutor (OSP).

“The President showed good faith by appointing someone not from his own party. Mr Amidu is a former Deputy Attorney-General, Attorney-General and also running mate of the NDC.

“It is not as if the President appointed someone who will do the bidding of the government. That implies that there was a desire to have an independent body. That is inconsistent with what Mr Amidu is saying. What is the evidence of the so called interference Mr Amidu had suggested?” he asked.

Mr Greenstreet said the President acted on the corruption-risk assessment by referring the Agyapa deal back to Parliament.

“The whole OSP has been a bit murky. Nothing really seems to be clear there,” he added.

The presidential candidate of the LPG, Mr Kofi Akpaloo, told the Daily Graphic that the resignation of the SP came as no surprise and was even long overdue.

He said Mr Amidu failed to perform as SP and had to refund all the remunerations he received to the state.

“The SP did not do any work as a state prosecutor; he wasted state resources and did not prosecute anybody. The Airbus scandal came out in January 2020 and up till now he has not been able to prosecute anybody, unlike in other jurisdictions where some people involved in the scandal have been jailed,” he said.

The PPP described the resignation as disappointing and unfortunate, especially because of the reasons Mr Amidu put out as the basis for his resignation, reports Severious Kale-Dery.

The party’s presidential running mate, Mr Kofi Asamoah Siaw, said it was clear that there was no political commitment and the President was directly interfering with the OSP in the SP’s attempt to pursue allegations of corruption against members of his government.

He said the reasons for Mr Amidu’s resignation demonstrated the lack of commitment on the part of the President to the fight against corruption.

He said the way forward was to amend Article 88 of the Constitution to separate the Attorney-General’s (A-G’s) Department from the Ministry of Justice to make the A-G an independent body, completely outside Executive control.

The General Secretary of the NDP, Alhaji Mohammed Frimpong, said placing the OSP under the control of the Executive made it vulnerable to leadership friction and that might have resulted in the SP’s predicament, reports Joshua Bediako Koomson.

He explained that the issue of corruption was serious, and since the OSP was under the ambit of the Executive, it was possible it could result in professional manipulation.

“The office should rather have been linked to the Judiciary and not have any connection with the Executive. Its mix up under the control of the Executive and thinking that it must also have prosecutorial powers makes it very difficult,” Alhaji Frimpong added.

The Presidential Candidate of the People’s National Convention (PNC), Mr David Apasera, expressed surprise at the decision by the SP to “leave the boat midstream”, reports Timothy Gobah.

He said the nation had earmarked Mr Amidu, as a lawyer of repute, to do a good job but had to resign now.

Going forward, Mr Apasera advocated that the budget for that office must be guaranteed, while the SP should be allowed free hands to operate.