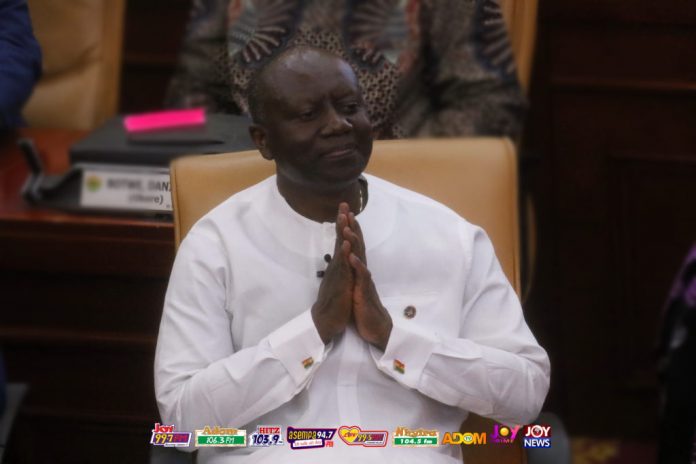 Ex-Special Prosecutor Martin Amidu has revealed that Finance Minister Ken Ofori-Atta was in his house on 21 October 2020 while he (Amidu) was compiling his corruption and anti-corruption risk assessment report on the controversial Agyapa Royalties deal.

Mr Amidu, in an exclusive interview with Accra-based Citi FM’s Umaru Sanda Amadu, also wondered why there is so much vitriol against him from people in government following his release of the report.

“The fact that you are in government doesn’t mean that when you are dissatisfied about a report, you go after the person or the fellow”, he said, revealing: “The Minister of Finance has been my friend for years; why will I go for him? When I was writing the report, didn’t he come to this house? Was he not here on 21 October? What did I tell him? Why is he now churning our information about me and targets and all that? Should I come out? Let’s stop it and I say let’s stop it before we wash dirty linen in public”.

Also, Mr Amidu has said if he is harmed in any way or killed, President Nana Akufo-Addo must be blamed for it.

According to him, he has been the target of threats of harm ever since he left office in connection with his corruption and anti-corruption risk assessment report on the controversial Agyapa Royalties deal.

Mr Amidu, who resigned from office as the Special Prosecutor on Monday, 16 November 2020, served notice to the Akufo-Addo government in an audio note that if the attacks on him do not cease, he would be forced to come out to defend his integrity “without fear or favour” and damn the consequences.

“Please, I have said since I left office that I was not going to do any fresh interviews about my resignation, I was not going to talk to the press. I am being pushed by so-called responses to me, which contain blatant falsehoods, to speak but I do not want anybody to blame me when I speak out and it becomes unpalatable”, Mr Amidu warned.

“So, either the attacks stop or I’ll defend my integrity, even if that means my death. It is something I won by dint of hard work from the PNDC to date and I’m not going to allow anybody, not even the president, to pull that integrity into the mud”, the former Attorney General said.

“I am a poor man who tries to lead a straight and narrow life and crusaded against corruption without asking for payment, so, they will try to destroy me”, the Citizen Vigilante noted, adding: “Anybody who tries to fight corruption must be aware from the beginning that corruption will fight back and all that is going on is corruption fighting back”.

To him, “it is demonstrating that the whole rhetoric about fighting corruption was mere rhetoric”.

He said: “They should tell their people, who they wrongly briefed to be telling lies about me, to stop before I decide to respond and when I decide to respond, I’ll do so without fear or favour, even to the extent that if my life will be taken for speaking the truth and defending the Constitution of Ghana, as by law established, I’ll do so”.

“It must stop”, he emphasised.

Mr Amidu said his critics and detractors must know that he is a “Citizen Vigilante”.

“That is what they must remember”, adding: “All these threats about bugging me, armed robbery, burning my house, I’m aware”.

According to him, several attempts by him to speak to the Minister of National Security, Mr Albert Kan Dapaah, on the threats against him, have hit dead ends.

“I tried to call Kan Dapaah, he didn’t pick it and I got a former national security advisor to contact him and tell him that, and I know the persons involved, I can name them but I reserve it for the meantime”, he said.

“I put my life for the republic of Ghana and the president will be responsible for anything that happens to me”, Mr Amidu charged.

He said there have been a plethora of threats of robbery and arson against him. “The intelligence is there and I called the minister of national security but he didn’t pick and I got a former national security advisor to speak to him and this fact is now known and I say that the president will be responsible for anything that happens to me”.

“I’m a Ghanaian and I don’t fear anything and, as I said, to die in the cause of fighting corruption is what I started with President Jerry Rawlings on 31st December 1982 and I’m not going to leave it because some people think that they can threaten me. I don’t give a damn about that.

“…If they don’t stop, I’ll respond”, he threatened, saying: “As to what I’ll do, I reserve that for myself but as I said, whatever happens to me, I lay my life for the republic of Ghana and the president has a constitutional duty to protect me. I don’t need any security in my house or to follow me. And anybody who makes an attempt, he will have himself to blame”.

Mr Amidu also revealed that his kinsmen are ready to come down south in his defence.

“People have called and want to come in truckloads from Bawku and I told them that what they are hearing is not true because, as a citizen of Ghana, I’m entitled to say my mind and defend the Constitution”.