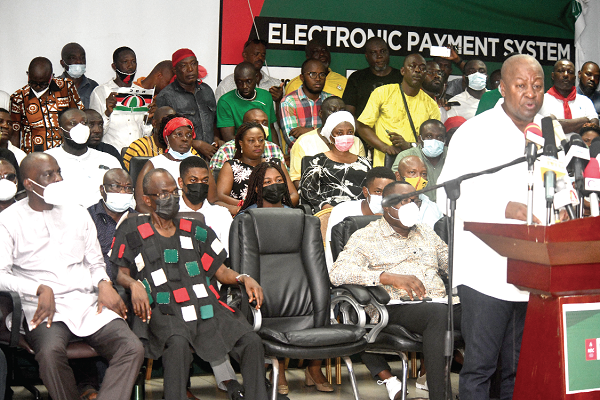 The presidential candidate of the National Democratic Congress (NDC), former President John Dramani Mahama, has said the party is deploying a “crack team” of lawyers and senior party officials to support their members in the constituencies to detail the full extent of infractions in last Monday’s polls for appropriate redress.

He said the NDC would continue to engage in a meticulous audit of all presidential pink sheets to ensure that the verdict of the people was upheld.

Mr Mahama reiterated the party’s position that it would not accept what it knew to be a fraudulent outcome of the elections, saying: “We will take all legitimate steps to reverse this travesty of justice.”

The former President explained that the decision to reject the election results was arrived at after a firm conviction that some of the electoral processes, including the collation of results, were deliberately manipulated in favour of the governing New Patriotic Party (NPP).

While describing the process as “dishonest,” he further accused the Electoral Commission (EC) of contravening aspects of Constitutional Instrument (C.I.) 127 that governed the elections to be able to execute its agenda.

The former President also alleged that there was a deliberate plan to manipulate and predetermine the results of the election in favour of incumbent President Akufo-Addo, who controls all state resources and institutions.

According to Mr Mahama, facts and figures available to the NDC from pink sheets and other evidence across the country indicated that numerous steps were employed to manipulate the results of the election in favour of the incumbent President.

He said unlike previous elections where collation of results were backed by pink sheets, “a different system was adopted, one in which bulk regional results were provided without supportive pink sheet data by which agents could validate the accuracy of the result. Consequently, not a single pink sheet from the constituencies supporting the bulk regional collation was provided. This is in direct violation of Regulations 3 and 44 of the Public Elections Regulations, 2020. (C.I. 127). Little wonder that the Chairperson (Mrs Jean Mensa) managed to obtain a cumulative figure of more than 100 per cent,” Mr Mahama said.

For instance, he said in the Eastern Region, the results of the presidential election, which were collated and signed by all the parties were not the same ones that were transmitted from the region to the EC offices in Accra, adding that “the padded figures had since been exposed.”

“The Ashanti Region provides fundamental problems that require further investigation and an electoral audit. Evidence gathered across the board shows that the aggregates on the summary sheets of some constituencies do not reflect the individual results on the polling station pink sheets,” he said.

Again, Mr Mahama said there were bulk regional results without supportive pink sheet data by which agents could validate the accuracy of the result.

Former President Mahama said in spite of the manipulation of the election process, the NDC was confident that it won the election.

“In spite of all the ruling party’s inducements, use of monetary enticements and other such schemes on a scale never before seen, the good people of this country understood what was at stake and it was clear, as the result of the votes show, that the NDC won the presidential and parliamentary elections.

“No amount of trickery, sleight of hand, or obfuscation will erase that reality. I am extremely proud of our parliamentary candidates who have earned for themselves the title of “giant elephant killers”. We went into the parliamentary election with a deficit of 63 seats,” he said.

“I know dark moments like these can make us question our resolve and confidence in the promise and potential of Ghana and our democracy and institutions. I choose to be a determined optimist based on my personal article of faith, formed by long service to my country, including service in the high office of President,” he added.

The former President also claimed that the decision by the government to deploy the military to monitor the election was aimed to intimidate the opposition, resulting in the loss of lives of some citizens when gunshots were allegedly fired into crowds by the deployed military team in places such as Techiman.

“Finally, let me assure our teeming supporters and millions of Ghanaians who voted for this change which has been stolen — the real stolen verdict — that we are beefing up capacity in the constituencies, where the ruling NPP is seeking to overturn our parliamentary victories already chalked up,” he said.

Professor Samuel Kwaku Bonsu is the new rector of GIMPA –