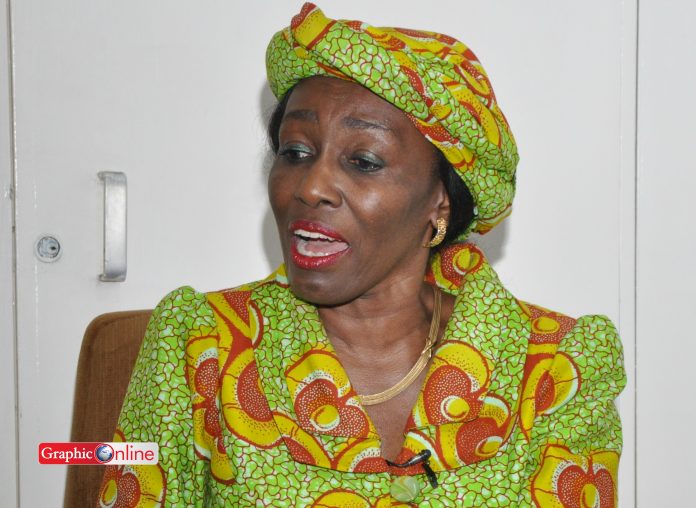 The National Democratic Party (NDP) has reiterated that its Flag-bearer, Nana Konadu Agyeman Rawlings, will not withdraw from the December 7 presidential election even though she is mourning her husband, former President Jerry John Rawlings.

The National Communications Director of the party, Maame Yaa Edusei, said after the demise of the former President, the National Executive Committee of the NDP devised a new campaign strategy that was led by Mrs Rawlings’ running mate, Mr Peter Tennyson Nana Kwame Asamoah.

“She’s (Nana Konadu) still in the race but we are still receiving many calls from the Volta Region that she has pulled out,” Ms Edusei told the Daily Graphic in a telephone interview.

“Although she cannot campaign because she is mourning her husband, we have a running mate who has taken up the mantle and is campaigning across the country,” she added.

Ms Edusei stated that the new campaign strategy also involved deploying the 43 parliamentary candidates of the party as well as members of the National Executive Committee to propagate the vision of the party across the country.

She also indicated that the party expected to win a minimum of 10 parliamentary seats in the 2020 election.

“We have met with the 43 parliamentary candidates at the party headquarters to develop a campaign strategy and the party expects to win at least 10 constituencies because we have a leader who is not corrupt. Our campaign also focuses on improving the livelihoods of teachers who will ensure the success of the Free Senior High School programme and farmers with particular emphasis on reducing post-harvest losses and providing raw material from programmes such as One-district, One-factory,” Ms Edusei said.a

What Okyenhene said about villagers, witches who insult adults [VIDEO]