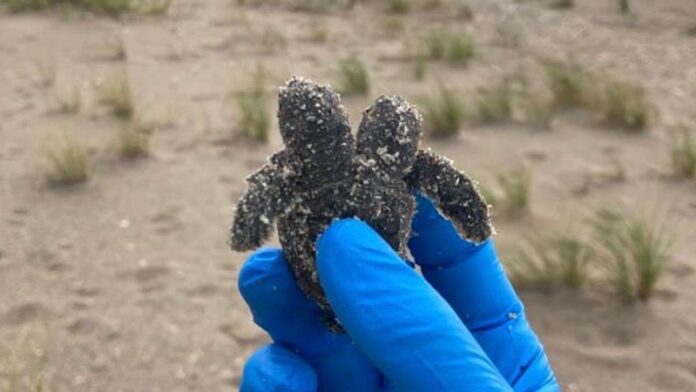 A two-headed turtle hatchling was found on a South Carolina beach in what has been branded as a “very rare find” .

The baby turtle was found by patrollers and volunteers at Edisto Beach State Park who were carrying out a routine inventory on turtle nests.

South Carolina State Parks said in a statement on Facebook how patrols dig into turtle nests three to five days after they emerge to determine the success of the nest.

They will count the hatchlings that have emerged from their shells and those that have died to assess the likelihood of the nest breeding as much as it should.

As they dug into one nest last month, they found three live hatchlings, according to the statement, but one of them “stood out”.

The statement describes the moment the “very rare” discovery was made.

It reads: “While performing an inventory this past Wednesday, patrollers and volunteers found three alive loggerhead sea turtle hatchlings still in the chamber, but one hatchling in particular stood out because it had two heads!

“This two-headed hatchling is the result of a genetic mutation.

“Other two-headed hatchlings have been found in South Carolina in past years, but this is a first for the patrol team at Edisto Beach State Park.

“After a few photos, this hatchling, along with the two others found, were released into the ocean.”

The three turtles were released back into the ocean once the group took the time to immortalise the moment.