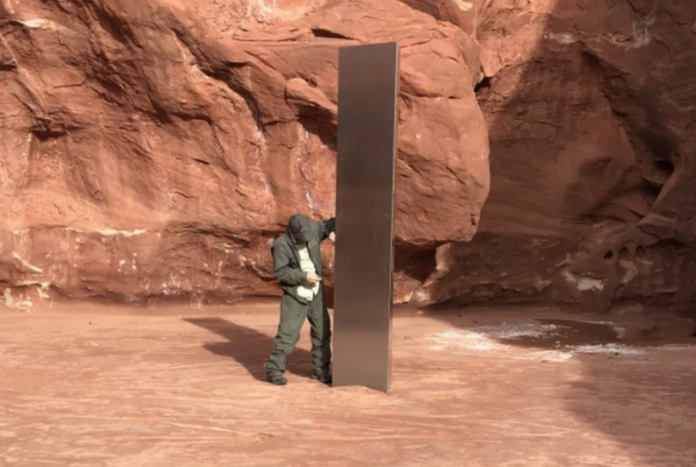 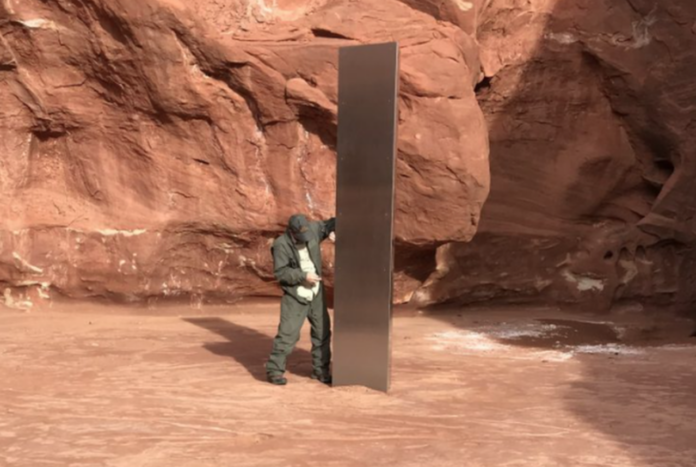 A strange metal monolith has been discovered in the Utah desert by a helicopter crew, leaving local authorities baffled.

Wildlife officials spotted the “unusual” object while counting sheep during a flyover in a remote South-Eastern area of the United States state.

They said the structure had been planted in the ground between red rock.

There was no indication who installed the monolith, which was about 10 to 12ft (3.6m) tall.

In an interview with local news channel KSLTV, the helicopter pilot, Bret Hutchings, said: “That’s been about the strangest thing that I’ve come across out there in all my years of flying.”

Mr Hutchings said a biologist counting big horn sheep in the helicopter was the first one to spot the structure from the sky.

Mr Hutchings speculated that the monolith may have been installed by “some new wave artist”, or a fan of 2001: A Space Odyssey, the 1968 film directed by Stanley Kubrick.

Imposing black monoliths created by an unseen alien species appear in the movie, based on the writing of novelist Arthur C Clarke.

It said authorities would determine if “they need to investigate further”.

“It is illegal to install structures or art without authorisation on federally managed public lands, no matter what planet you’re from,” the department said.

The department has not disclosed the exact location of the monolith, fearing explorers may try to seek it out and “become stranded”. The big horn sheep wildlife officials were counting are native to many parts of southern Utah, where the terrain is rugged.

As yet, no one has claimed responsibility for installing the structure.

Looking for answers, Utah’s highway patrol turned to social media, writing in a post on Instagram: “Inquiring minds want to know, what the heck is it? Anyone?”

Most observers presumed it was an installation left by a sculptor, with some saying it resembled the work of late minimalist artist John McCracken.