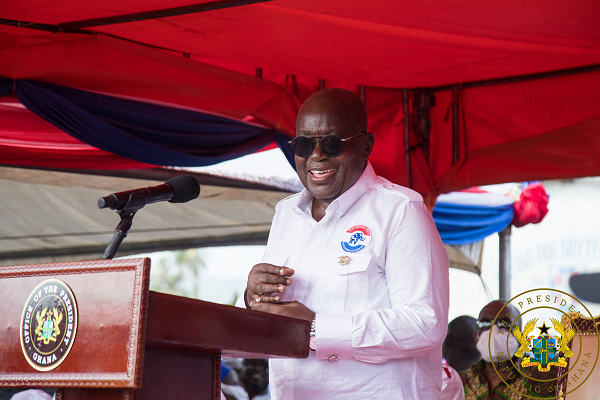 Wrapping up his national campaign for re-election, President Nana Addo Dankwa Akufo-Addo Saturday said his transformational leadership would earn him an overwhelming endorsement at the December 7 polls.

He said he believed the Ghanaian people supported his progressive vision and would rally behind him to build a nation of progress, prosperity and development.

At a packed rally at Mantse Agbonaa in the Odododiodio Constituency in Accra, the President told teeming supporters of the New Patruotic Party (NPP) that he had in the past four years worked hard to take Ghana forward, and “the time has come to render accounts of my stewardship”.

He said the social and economic policies and programmes that his administration had pursued had impacted positively on the lives of Ghainaians and the economy, and that a sound foundation had been laid for the transformation of the country in the next four years.

The asked the crowd whether he had fulfilled the promises he made to them, to which they responded in the affirmative.

“The mandate that you gave me, have I been able to fulfill? he asked.

And the cheering crowd responded with a thunderous “Yes” as they erupted into wild jubilation amidst the blowing of trumpets and the tooting of horns.

“If you are satisfied with my work, give me another four years to continue with the development of our country,” he said.

“We (NPP) have the blueprint for the development of our country. Give us four more years to consolidate the tremendous gains that we have made.

“If the four more for Nana will work, you should turn out in your numbers and vote boom boom boom for progress and development,” he said, and urged Ghanaians to ensure that their votes were countered.

President Akufo-Addo took a swipe at his main political opponent, former president John Mahama, whose campaign, he said, had collapsed in confusion.

He said his contender was making baseless talk and unrealistic promises on his campaign trail “as if he has not been president before” and should be rejected at the polls on Monday.

“We know him, he virtually did nothing during his time, nothing and Ghainaians voted him out of office because of incompetence and lack of vision.

“He wants to ride on the back of fabricated and doctored tapes to power but it will not work. He is bankrupt of ideas and carrying about a campaign of deceit….Disregard his promises because he has nothing to offer Ghana,” he stated.

“The Ghanaian people are not ready to go backward…it will not happen,” the President said, averring that Ghanaians were discerning people and would not be hoodwink by Mr Mahama’s ” lies and fabrications”.

The President entreated the constituents of Odododiodioo to also vote for Nii Lantey Bannerman, the NPP parliamentary candidate for the area.

He asked Ghanaians to come out in their numbers on Monday, December 7 to vote for him and the Party’s parliamentary candidates.

He also advised them to conduct themselves decently at the various polling stations and desist from any electoral violence that could mar the process.

The President’s convoy had earlier in the day drove through Nima and Maamobi in the Ayawaso North Constituency before heading to Kasoa in the Awutu Senya East Constituency in the Central Region where he addressed NPP’S supporters.

Collabo with secular acts not my thing – Kwaku Gyasi