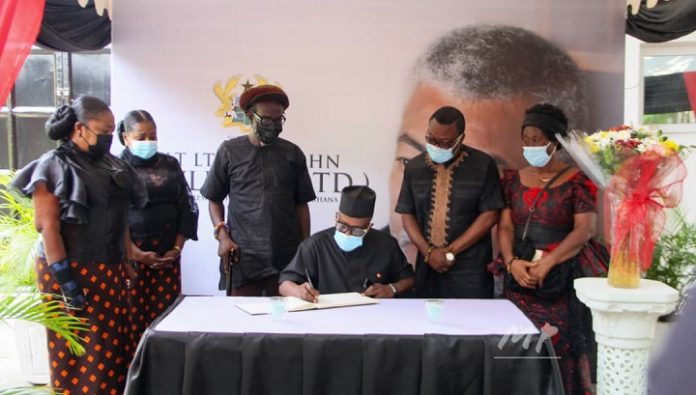 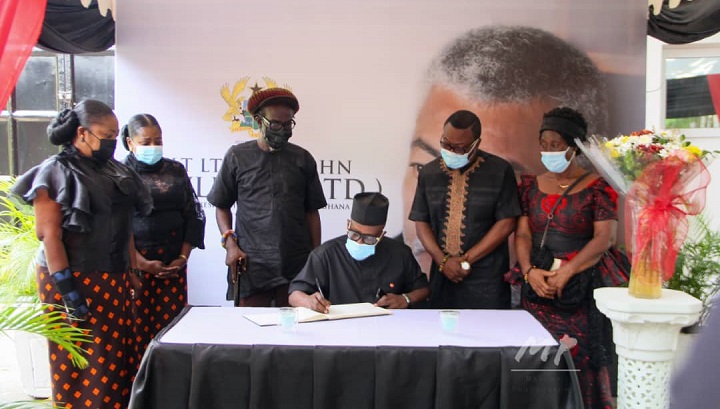 Acting MUSIGA President, Bessa Simons (seated) signing the Book of Condolence for former President Rawlings. Looking on are some members of MUSIGA who were part of the delegation

The leadership of the Musicians Union of Ghana (MUSIGA) and the Ghana Music Rights Organisation (GHAMRO) has paid a courtesy call on the family of former President President Jerry John Rawlings to commiserate with them.

President Rawlings died on Thursday, November 12 at the Korle Bu Teaching Hospital after a short illness.

During the visit, the acting President of MUSIGA, Bessa Simons expressed the grief of the music industry on the death of the man who was affectionately known as Papa Jay.

He spoke of the special relationship between the Union and President Rawlings who always had some words of advice whenever the Union called on him.

He recalled that the last time the Union’s leaders met President Rawlings was when he lost his mother.

The MUSIGA and GHAMRO delegation

Chairman of GHAMRO, Rex Omar, lauded the support President Rawlings gave to the music industry. He recalled the presentation of the Union’s head office and the continued support he and Nakorex received from Mr Rawlings.

Read more: Rawlings’ family has told me not to imitate him for now – Clemento Suarez

On his part, the acting Vice President of MUSIGA, Rev Dr Thomas Yawson, assured the family of the support of the Union and the entire music industry in their moment of grief.

Responding on behalf of Rawlings’ family, Ambassador Victor Gbeho expressed their gratitude for the kind words and expression of sympathy from the industry.

Dr. Ezanetor Rawlings, daughter of President Rawlings and MP for Korle Klottey constituency also expressed the family’s appreciation for the visit and support from the music industry.

Woman, 34, who was told she had very low chance of getting pregnant becomes a mum-of-three within a year