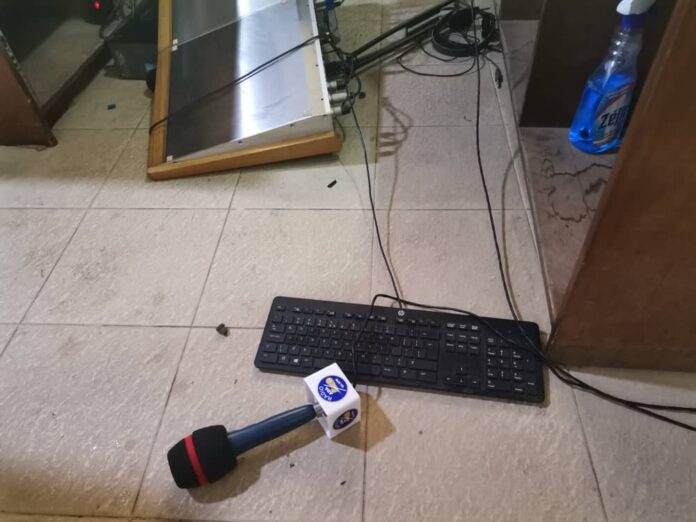 The Media Foundation for West Africa (MFWA) has condemned the attack on the Radio Ada (93.3 FM), a community radio station in the Greater Accra region.

The Foundation has demanded an immediate investigation and prosecution of perpetrators.

A group of thugs numbering about 12 on January 13, 2022, stormed the premises of the community radio station, assaulted two of its journalists and vandalised equipment.

A journalist at Radio Ada who is also the External Communications Officer of the media house, Julius Odoi, told the MFWA that the hoodlums invaded the station at around 11:45 am after a drinking binge at a nearby drinking bar.

They demanded to see the Manager and when told by the security guards that he was not available, the intruders forcibly entered the building. They broke the studio door and caused mayhem.

According to Odoi, the thugs ordered Gabriel Korley Adjaotor, who was presenting a music programme, to stop his presentation.

“Before the presenter could react, they disconnected cables, smashed computers and attacked the console and microphones, disrupting the broadcast in the process,” Odoi told the MFWA in a telephone conversation.

After upsetting the studio, the thugs assaulted the presenter amidst warnings to the station to stop its Manor Munyu programme, a regular feature that discusses the state of the salt mining industry, the mainstay of the Ada economy.

The invaders who had come carrying bottles of alcohol, also forced another journalist, Gideon Amanor Dzeagu, to kneel for several minutes while they proceeded to turn the whole premises into a mess by breaking their bottles and littering the place with alcohol and shards.

The Ada Songhor programme is highly critical of the operations of Electrochem, the firm accorded the rights to mine salt in the Songhor Lagoon. Electrochem has in the past had to write to the Management of the radio station to complain about alleged misrepresentations about its operations and demand an apology. There is, however, no indication that the attackers are linked to the salt mining firm.

Meanwhile, the presenter, Gabriel Korley Adjaotor, is said to be responding to treatment, having been rushed to the District Hospital for attention.

The Ada District Police Commander, DSP Andreas Mifetu, confirmed to the MFWA in a telephone chat that his outfit issued a medical form to the presenter after the station reported the assault.

The Police chief also confirmed that a team of officers have been dispatched to the premises of Radio Ada to verify the incident, as part of investigations.

The management of the radio station, in a statement, has announced that the station will shut down for a few days to enable it to review and repair the extent of the damage caused.

Radio Ada has a reputation for critical reports which hold the powerful to account. On August 2, 2018, the police stormed the station in search of one of its radio presenters, Joseph Korletey Korley, popularly known as DJ Koxterio. The journalist had angered the chiefs of the traditional area by demanding that they account for the funds raised at the annual cultural festival, Asafotufiami.

The MFWA vigorously condemns this shameful attack on Radio Ada and its staff by the cowardly hoodlums. It is a vicious attack that seeks to silence the media house and instil fear in journalists.

We are confident that the station and its staff will continue to stand firm in service to the public and demand that the authorities take measures to provide them the needed protection. We urge the police to conduct thorough investigations into the incident and bring the perpetrators to book.