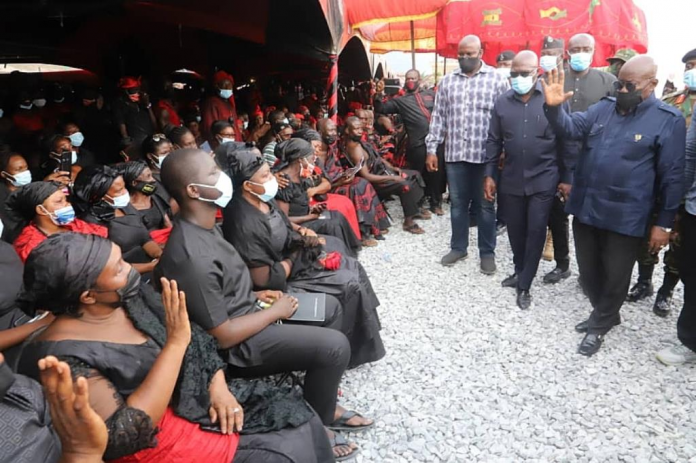 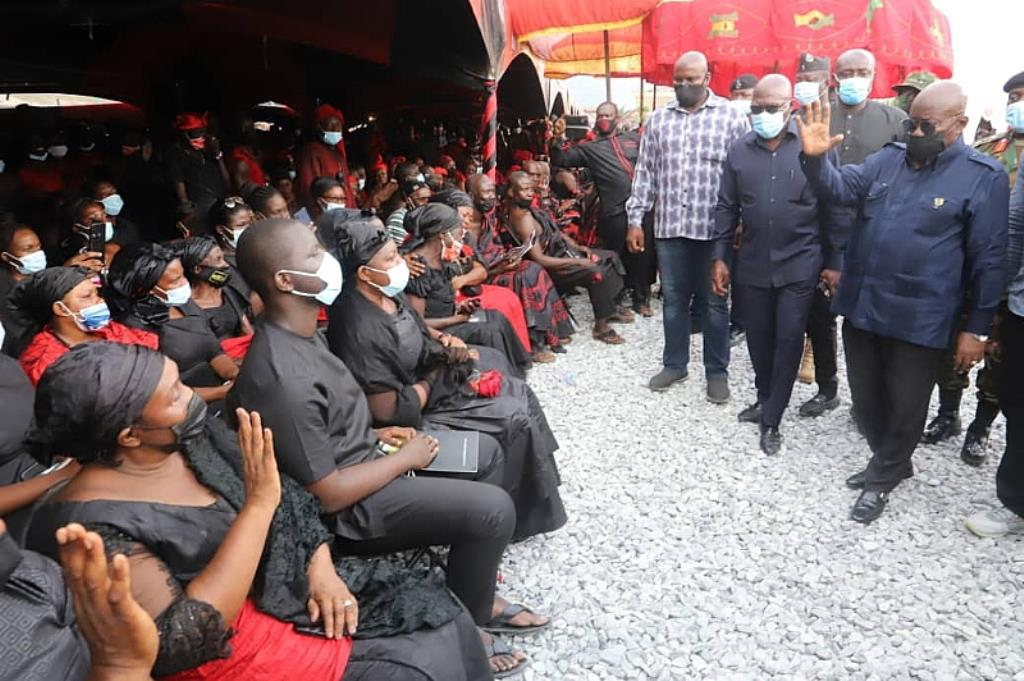 The former Member of Parliament for Mfantseman in the Central Region, Mr Ekow Kwansah Hayford, has been laid to rest.

Hundreds of mourners from all walks of life thronged the MA School Park in Mankessim last Saturday to pay their last respects to the former MP who was allegedly killed by armed robbers around Mankessim while he was on his way back home from a political campaign on October 8, this year.

The funeral ground was a sea of red and black, with many mourners shedding tears as they filed past the body of the former legislator.

President Nana Addo Dankwa Akufo-Addo, Vice-President Mahamudu Bawumia, the Speaker of Parliament, Prof. Aaron Mike Oquaye, MPs, officials and supporters of the New Patriotic Party (NPP) and family members and friends of the late MP were among the mourners.

While many of the mourners wore T-shirts embossed with the picture of the deceased, others displayed the picture of the widow, Mrs Ophelia Mensah Hayford, who has since replaced her husband as the parliamentary candidate for the constituency in the December polls.

Some mourners were seen shedding tears as the window read her tribute.

“The love of my life who did everything to protect the children and I. Papa, as I affectionately called him, was a husband full of smiles and unconditional love,” she said.

Mrs Hayford recounted their journey after tying the knot in 1996.

Master Prince Hayford, who stood in for his siblings, also described his father as a mentor who made a lot of impact in their lives.

Reading a tribute by Parliament, the Majority Chief Whip, Mr Kwasi Ameyaw-Cheremeh, said though the late MP was not a development agent by mandate, he kept faith with the people and always sought to influence development projects for the constituency.

The General Secretary of the NPP, Mr John Boadu, described the late MP as a “liberal lion” who had a fierce, independent and innate decency and also spoke his mind on matters in which he believed.

He said Mr Hayford was never afraid “to rock the boat” when he felt it was the right thing to do.

Mr Boadu further said the late MP was a friend to many, supportive and not shy to speak at meetings.

Preaching the sermon, the Bishop of the Cape Coast Diocese of the Methodist Church, Rt Rev. Richard Aboagye Andam, quoted verses on death from the Bible and said anybody could be called at anytime.

He, therefore, said it was important for all to accept Jesus Christ as the Saviour and commit their lives to the Word of God by desisting from destructive lifestyles and behaviours.

Donations from the government, the NPP and Parliament totalled GH¢505,000.

Woman in trouble after nightclub’s UV light exposes her underwear