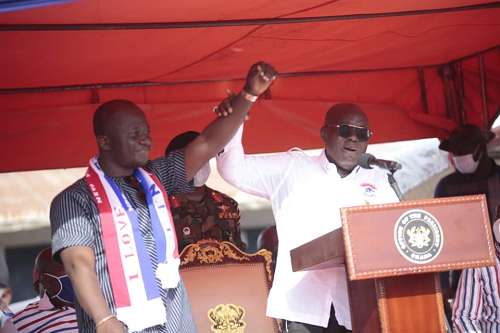 President Nana Addo Dankwa Akufo-Addo has described the National Democratic Congress (NDC) and its leadership as people without any sense of shame, as they do not regret their actions over the lies they told about the free SHS programme.

“If I were them, for the sake of shame, I will give the NPP their stone. I know the NDC; they don’t have any sense of shame. They don’t even remember that they had said all those bad things about the Free SHS policy,“ he stated.

President Akufo-Addo made the accusation at Adeiso in the Upper West Akyem Constituency of the Eastern Region as part of his one day campaign tour of the region.

President Akufo-Addo also introduced three students of the first batch of the free SHS programme who had 8 1As in their West African Senior School Certificate Examination (WASSCE) results.

President Akufo-Addo who was visibly excited at the presence of the brilliant students called them “Akufo-Addo graduates papabi, papabi,” describing them as the future leaders of the country.

He said the students have made all Ghanaians proud and that those who cast doubts and made aspersions the free SHS programme had been put to shame.

He led the teeming crowd at the Adeiso football park to clap for the three students for their stellar performance in the WASSCE.
“You have done well and let me assure you that we on our part will do the best we can to promote your lives,” President Akufo-Addo pledged.

He urged the people in the Constituency to change their voting pattern and elect an NPP candidate to represent them in Parliament, saying that the seat has been occupied by the NDC since 1992.

President Akufo-Addo urged the people in the area not to be complacent that he (Akufo-Addo) had won already so there was no need to vote.

He said he (Akufo-Addo) will only win the elections when all of them (electorate), together with their friends, family members and colleagues go out to vote massively for the party.

The NPP Parliamentary candidate for the area, Mr Fredrick Obeng Adom enumerated the numerous projects that had been done in the area under the leadership of President Akufo-Addo’s government.

He appealed to the electorate to vote for him and President Akufo-Addo.