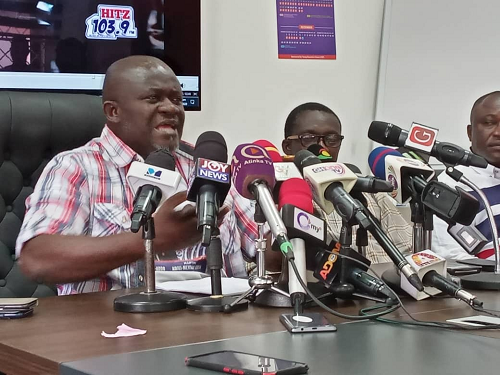 The leadership of the New Patriotic Party (NPP) in the Techiman South Constituency of the Bono East Region has debunked allegations by the opposition National Democratic Congress (NDC) that the Electoral Commission (EC) did not declare the collated parliamentary results for the constituency in the 2020 elections.

According to the party, the EC collated the constituency figures and declared it in the presence of all the parties that were involved in the elections, including NDC officials.

Speaking at a press conference in Accra on Friday, December 11, 2020, a former Municipal Chief Executive of the Techiman Municipality, Mr Prince Yaw Donyina, said the leadership of the NDC in the constituency prior to the declaration of the results by the EC had told their supporters through a local radio station that they (NDC) had won the elections.

He added, following the NDC’s call and claims, many of their supporters massed up at the collation centre, which also served as a regional collation centre for the Bono East region.

Mr Donyina explained that soon after the collated results for the constituency was declared, the NPP executives and their candidate left the venue because the NDC supporters attempted to attack them.

According to him, when they (NPP officials) were trying to escape from the collation centre, the current Member of Parliament (MP) for the area, Henry Yeboah Yiadom-Boachie, fell down and he (Donyina) had to lift him up from the ground for them to escape.

On what caused the violence and death of some people at the collation centre, he said the incident happened after they (NPP officials) had left the place.

He, however, blamed the parliamentary candidate and leaders of the NDC in the constituency for the lives that had been lost in the area due to the elections.

Mr Donyina said it was regrettable that human lives had been lost at the constituency due to the just ended elections.

“If there is anybody to blame for the Techiman death, it should be the candidate, chairman and the NDC’s Constituency organiser,” he stated.

He also debunked an allegations that the NPP used the security, particularly the military to intimidate the NDC’s agents at the collation centre, saying that the party (NPP) officials in the constituency were not responsible for the deployment of the security personnel.

“We had nothing to do with the deployment of security on the election day,” Mr Donyina noted, pointing out that “Techiman is a very peaceful place to live, it is the NDC that is causing mayhem there.”

He has, therefore, called on the National Security Minister to deploy security personnel to protect lives and property in the area as some NDC supporters were bent on causing mayhem in the area.

For his part, the NPP’s candidate for the Techiman South Constituency, Martin Adjei Mensah Korsah, stressed that there was no need for anybody to foment trouble in the area.

He said because the NDC lost the elections, they had resorted to peddling falsehood, saying that the party (NPP) had all their Pink Sheets.