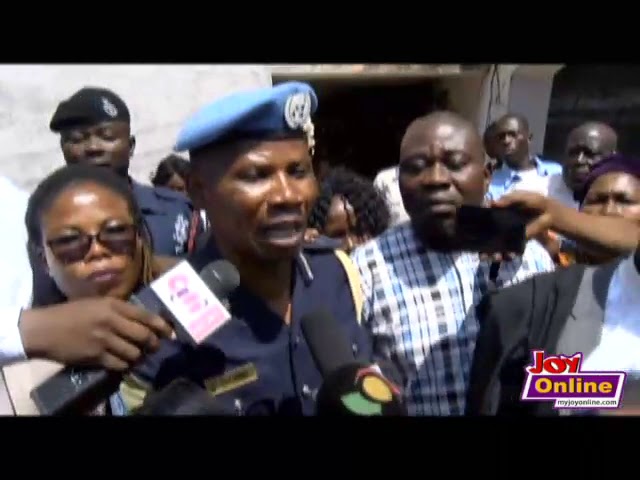 It has emerged in court that contrary to claims that Assistant Commissioner of Police (ACP) Dr Benjamin Agordzo discussed Arab Spring with Dr Frederick Yao Mac-Palm in their bid to overthrow government, he shared similar concerns with the Ministers of Defence and Interior on ‘Alert with Adam Bonaa.’

ACP Dr Agordzo has been charged for abetment in the case in which some 10 persons have been arraigned for plotting to overthrow government.

They have all pleaded not guilty and have been granted bail while standing trial.

Taking his turn to subject Chief Inspector Michael Nkrumah, the Investigator to cross-examination, Lawyer Kormivi Dzortsi, counsel for ACP Agordzo (A10), accused the investigator of being untruthful.

According to counsel, ACP Dr Agordzo was a lecturer at the Kofi Annan Peacekeeping Centre and the University of Education Winneba, where he lectured on Contemporary Security Challenges and Conflict prevention.

It was the case of counsel that, when ACP Dr Agordzo (10th Accused) had discussions with Dr Mac-Palm (1st Accused), about Arab Spring, it was in the contest of a concerned expert cautioning a nation to be wary.

But, Chief Inspector Nkrumah, the 14th Prosecution Witness and the last to be called by the state disagreed.

“If it was a caution to the state that was not the platform the caution should go to,” he answered when it was put to him.

When it was again put to him that the ACP Dr Agordzo sounded similar cautioned on other WhatsApp platforms with other Ghanaians, apart from Dr Mac-Palm (1st Accused), the investigator said he does not know.

Asked by counsel if it was his case that, his investigation did not uncover the fact that ACP Dr Agordzo shared information on Arab Spring on other platforms, the witness offered an explanation.

He told the court that, he was not tasked to investigate the group or number of people ACP Dr Agordzo had been giving education messages to, so it never came to his attention.

While telling the court that, he tendered in evidence Dr Agordzo’s cautioned and charge statement, he said, though he saw that ACP Agordzo said he made similar comments on other platforms, “it was up to him (ACP Dr Agordzo) to produce those documents to the court if only he has ever shared those views with other people.”

He answered in the affirmative when asked by counsel to tell the court if he was aware that ACP Dr Agordzo applied for bail when he was arrested both at the District Court and at the High Court.

But when it was put to him that, ACP Agordzo had attached his lecture notes and WhatsApp extracts from other pages including “Alert with Adam Bonaa” to his affidavit, to show that he had made similar comments on other platforms, the witness offered explanation.

“The bail application of A10 (ACP Dr Agordzo) did not come to me, so I wouldn’t know whether those attachments were added to the application,” he told the court.

When it was again put to him that, ACP Dr Agordzo’s bail application was not just served on Attorney-General’s Department but his outfit BNI then and so he became aware of those similar comments, the witness said, “No my Lord.”

He explained that “the documents were not served on the BNI (now National Intelligence Bureau) but when the bail application came from AG’s office, the boss informed me through the office.”

At this point, counsel further put it to him that, ACP Dr Agordzo shared concerns of Arabs Spring on the ‘Alert with Adam Bonaa’ platform with the minister for defence then and now and “shared the same platform with Minister for Interior and other interior experts.”

But, the witness Chief Inspector Nkrumah said he was not aware.

It was the case of counsel that, on that platform, ACP Dr Agordzo’s concerns about the security of the state including the conditions of Arabs Spring being present in Ghana were shared.

At this point counsel accused the witness of not being “very truthful to the court” but the witness said, “I’m being truthful.”

Counsel also contended that the investigator refused to investigate clear statements in ACP Dr Benjamin Agordzo’s cautioned statement that he had comments about Arabs Spring on other platforms because he had a predetermined agenda.

Chief Inspector Nkrumah said, “That was not true.”

It was the case of the counsel that the agenda was to add his client to the case “by hook or crook”.

But the witness disagreed saying “A10 was added to the case based on his communication with A1 which corroborated with the discussions that have been done by the TAG (Take Action Ghana) executives on the TAG executive platform.

ACP Dr Agordzo according to the evidence of the investigator made a GHc2,000 donation to Dr Mac-Palm for the purposes of organising a demonstration for takeover of government.

This conclusion, according to the investigator, was based on his analysis of the WhatsApp chat between ACP Dr Agordzo and Dr Mac-Palm.

He answered in the negative when counsel put to him that there was no discussion between Dr Mac-Palm and ACP Dr Agordzo in the WhatsApp discussion that supported his claim before this court.

“There was a chat of discussion between A1 (Dr Mac-Palm) and A10 (ACP Dr Agordzo) where Dr Agordzo suggested printing TAG T-shirts for the demonstrators and thereafter, he forwarded a draft speech to A1 to be read on the day of demonstration.”

He also told the court that, it was the only discussion regarding contributions of money that emerged between their WhatsApp chats.

The investigator explained that, “the activities mentioned there are not explained as to whatever activities, but the subsequent chat made reference to the activities and the GHc2k for the demonstration.”

It was the case of counsel that, the evidence of the investigator in court means that, “you did not do a fair diligent investigation and that is why you claimed that activities referred to demonstration.”

In his response he said that was not true, saying “I did a diligent investigation.”

Counsel further put to him that the activities referred to in the chat between A10 and A1 was about community health outreaches being discussed on the main platform of TAG, which the investigator admitted.

“That’s true my lord and I indicated earlier that TAG executives plan to use outreaches programs to galvanise support from the grassroot so that when they hear that TAG has taken over government they will have support when they draft a new constitution and TAG will be registered as a political party to contest general election,” he explained.

When it was put to him that he had not led any evidence that A10 knew about these discussions on TAG platform, he said, that’s not true.

The investigator, however, agreed with counsel that the intelligent agencies never knew about the GHc2k donation until A10 disclosed same in his cautioned statement.

Five injured after clashes with police over Newmont concession