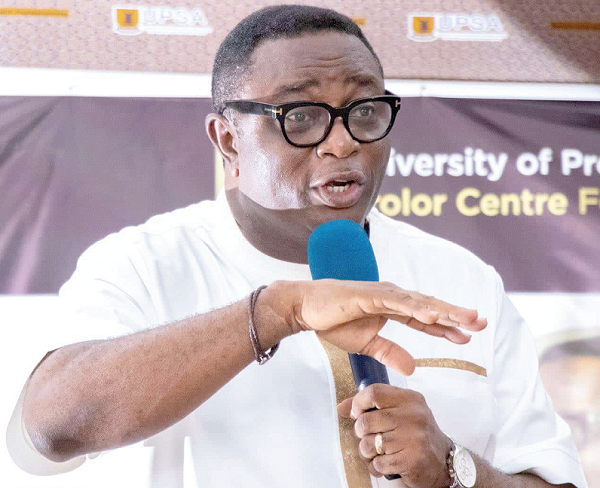 The Director of Elections for the opposition National Democratic Congress (NDC), Elvis Afriyie Ankrah, has said he will, if mandated as General Secretary, give the party a new face and a fresh breath of life.

He declared his intentions to run for the position last month although nominations for various national executive positions were yet to be opened.

According to Mr Ankrah, working within the party for over two decades had imbued with him with the necessary skills and experiences which make him uniquely qualified to help the party win the 2024 general election from the position of party scribe.

“I believe I have the requisite knowledge and experience, having worked within the party for over 20 years and having understudied Johnson Asiedu Nketia for about 17 years”, he said

Speaking in an interview with the Daily Graphic, Mr Ankrah stated that his two decades of serving the NDC had imbued with him a rich political history in leadership positions with excellent track records to back them up.

According to him, he has played many pivotal roles within the party which brought the party to success on a number of occasions.

“As a deputy general secretary in charge of operations which means I headed issues about security and elections, I worked with the team and together we gained victory in 2008.

Also, in September 2012, I was appointed as Campaign Coordinator for the John Mahama presidential campaign which I led and together with the rest of the team coordinated for three months and we won that election massively and decisively,” Mr Ankrah explained.

Mr Ankrah further intimated that holding various positions over the years, had honed his human relations and organisational skills making him uniquely positioned to bring people together which would prove useful for the NDC in the upcoming elections.

He said as a former campaign executive for two former presidents; namely John Evans Atta Mills and John Dramani Mahama, coupled with his role as a former deputy minister of local government, he has had the opportunity to establish good relations with members of the grass roots including metropolitan, municipal and district chief executives (MMDCEs) and traditional authorities through his travels to all four corners of the country.

“I do very well with the religious community.

I am the first to ever organise the largest gatherings of all religious heads of about 1,680 from every single religious community in 2012 at the Castle Gardens when I was campaign coordinator.

Also, I don’t think there is any major prominent chief who I don’t have a personal relationship with and I have good relations with civil society organisations (CSOs)” he said.

Mr Ankrah added that he also had the opportunity to study the psyche of the younger generation when he served as minister of youth and sports, adding: “I have four children, three of them are university graduates and part of the Generation Z, so I understand their psyche and I know how to bring all these people together.

“These are all networks I can bring to bear on the leadership of the party to give the party a new face and fresh breath of life,” he added.

Mr Ankrah began his life in politics as early as 1994 when he served as the president of the Student Representative Council (SRC) of the University of Ghana till 1996.

After which he gained corporate experience working as a Sales and Marketing Representative at Mechanical Lloyd.

Since 2000, he has served as Deputy Campaign Spokesperson for President John Evans Atta Mills during his presidential primary and subsequently deputy campaign manager in the 2004 general election.

He has also served as Deputy General Secretary in charge of Operations; Deputy Minister of Local Government; Campaign Coordinator for the John Mahama presidential campaign; minister of youth and sports; minister of state at the office of the president; and director of elections.