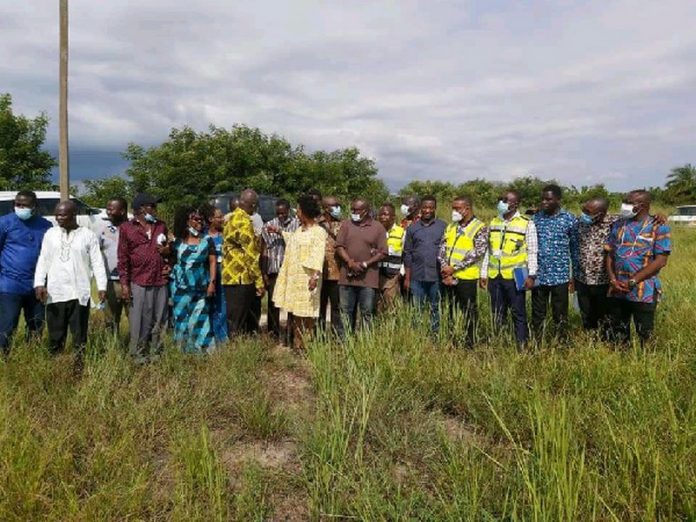 A high-powered delegation from the Aviation Ministry, led by the Minister, Mr Koffi Adda, has inspected a 600-acre land earmarked for the construction of the Cape Coast Airport at Ankaful.

The land, according to the Metropolitan Chief Executive of Cape Coast, Mr Ernest Arthur, is a government land, which had been purposefully reserved for the construction of the airport.

The delegation, including officials of the Ghana Airport Company, expressed delight at the development so far with Mr Adda saying; “This is good for the start”.

It could be recalled that in March, this year, some residents of Cape Coast took to the streets in demand of an international airport in the town chanting: “No airport No vote”.

Consequently, Dr Mahmudu Bawumia announced at the launch of the governing New Patriotic Party’s (NPP) Manifesto in Cape Coast in August that government would build an airport and a harbour there.

Some residents in the ancient capital were sceptical about the feasibility of the project and asked the Government to be clear on that as they were looking forward to it.

However, there seem to be some high hopes for the project following the inspection of the land by the Aviation Minister and his entourage.

Addressing the media after the inspection, Mr Adda indicated the potential for expansion and said the 600-acre land was enough for the run-way and terminal building, as well as other important facilities needed to made the airport functional.

He said feasibility studies showed that there was potential for a viable airport in Cape Coast, hence government’s decision to construct one there.

Funding had been secured, he said, and that once the necessary ground and paper works were completed, it would be sent to Parliament for approval.

Mr Adda was optimistic that the airport would provide many direct and indirect jobs to reduce unemployment in the Cape Coast Metropolis.