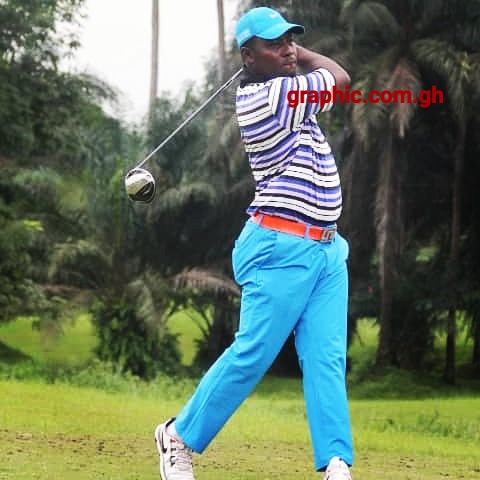 Lucky Ayisah sits atop the leaderboard after carding a two-under-par 70 on the first day of the seventh edition of the Golf Fields Professional Golfers (PGA) of Ghana tournament at the Damang Golf Course in Tarkwa.

Ayisah, a qualifier from the Achimita Golf Club is trailed by Godwin Sai and former winner Kojo Barni who both played an even-par 72 to end the opening day of the professionals competition in second and third place respectively.

Ayisah told Graphic Online in an exclusive interview that he was looking forward to finally breaking his duck and winning the Gold Fields PGA having participated in all editions of the tournament.

He said: My personal expectations coming into this tournament is to be more focused and swing better and win the seventh Gold Fields PGA championship and I am not surprised to be leading the first round today. I am focusing and working hard around my game a lot so I am here to lead from day one and to win and raise the trophy on the last day”.

One stroke behind Barni is Francis Torgah who played a one-over-par 73 and Robert Dedge and Emmanuel K. Osei who are are tied in fifth place after an identical three-over-par 75.

Veteran golfer Victor Brave-Mensah leads the seniors contest after a shooting a three-over-par 75 opening round.

He sits six strokes ahead of his closest challengers Peter Korsah and Akwasi Prempeh who are tied in second place after recording a score of 81.

James Larry and Ahmed Padori complete the top five with scores of 83 and 86 respectively.

The Gold Fields PGA tourney reaches a climax on Saturday with a GHS167,000 up for grabs in total prize money. The winner, first runner-up and second runner-up of the professional contest will bag GHS40,000, GHS22,000 and GHS12,000 for their respective efforts while the top three winners of the seniors contest will receive GHS10,000, GHS5,000 and GHS3,500 respectively.

Ghanaian students in China cry over neglect by Embassy