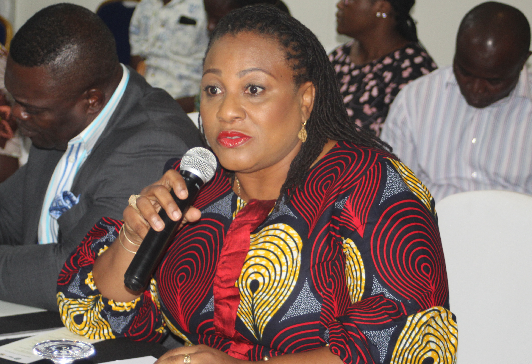 The Chairperson of the National Commission for Civic Education (NCCE), Ms. Josephine Nkrumah, has called on the Ghanaian electorate to turn out massively on December 7 to elect the country’s leaders.

“Do not sit on the fence and allow others to elect your President or decide who your representative in Parliament should be,” she said.

In an interview with the Daily Graphic, Ms. Nkrumah said the NCCE was working hard, through its educational programmes, to make turnout in this year’s elections one of the highest.

Ms. Nkrumah said the presidential election would pose a greater challenge to the electorate as a result of the high number of presidential candidates.

She explained that with 12 candidates on the ballot paper for the presidential election, it was important that every ballot paper remained valid to be counted in order not to trigger a run-off.

Ms. Nkrumah said samples of the ballot papers would be used to educate the public on how to thumbprint and fold them to ensure that every ballot paper was valid to be counted.

She said some voters would certainly find the ballot papers confusing due to the high number of presidential candidates.

She explained that the incidence of rejected ballots was not due to only the lack of education but also the intentional thumb-printing for two candidates as a result of voters collecting inducements from two candidates with the promise of voting for them.

She said there were perceptions that voters collected money from different candidates to vote for them, while some polling agents colluded with some electoral officers by using hair dye to stain ballot papers in the course of separating ballot papers before counting.

“All of us must act with integrity and be responsible and patriotic in the discharge of our civic responsibilities,” she said.

The NCCE Chairperson also urged the political parties and the candidates in particular to join in the campaign by educating the electorate on how to vote and fold the ballot papers.

Ms. Nkrumah said the NCCE had mainstreamed its COVID-19 public education into the voter educational programmes to achieve the dual goal of encouraging the electorate to vote and also observing the COVID-19 safety protocols.

She said with the rising cases of COVID-19, it would be disturbing to emerge out of peaceful and transparent elections with more COVID-19 cases or even a lockdown.

She, therefore, urged the leadership of political parties to demonstrate exemplary leadership by observing the safety protocols and encouraging their supporters to do same.

Ms. Nkrumah expressed her abhorrence for chiefs who were endorsing candidates, a practice that was at variance with Article 276 of the 1992 Constitution, which debars chiefs from dabbling in partisan politics.

She said it was not for nothing that the Constitution barred chiefs from taking part in politics and, therefore, called on the National House of Chiefs to address the issue.

She said chiefs were the rallying points for their subjects for social cohesion and development and so knowing that a chief belonged to a particular political party was not good enough.

The NCCE Chairperson also expressed concern about the tendency for some men of God to ‘prophesy’ election results when they knew that their ‘prophecies’ could cause disaffection and conflict even among their followers.

She said many of those men of God wielded influence on their followers who belonged to different political persuasions.

“If the ‘prophecies’ do not come to pass, how will they feel in the eyes of their followers? We should not condone such prophets and their messages,” she said.