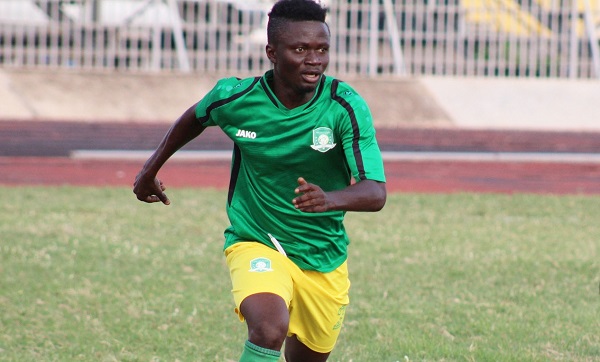 Elmina Sharks put up a gallant display to beat two-time champions Aduana Stars 1-0 at the Nduom stadium on Thursday.

Winger Richard Mpong scored the only goal of the game in the 21st minute after sliding in a corner kick from close range to give Yaw Acheampong’s side their first win of the season.

Mpong met a well delivered corner kick to beat the defence of Aduana as goalkeeper Joseph Addo failed to stop the ball for the winning goal.

Nathan Kwasi Asare also came close to registering his name on the score sheet but was denied a goal by the crossbar after he connected a Bright Agyei half bicycle kick.

Justice Mensah could have doubled Sharks’ lead before half time after he was sent through by Benjamin Tweneboah, but he failed to connect home after rounding up goalkeeper Joseph Addo.

The victory moved Sharks up to the second spot on the league log behind Karela United on seven points, having drawn their first three games against Dwarfs (2-2), Liberty (1-1) and WAFA (1-1).

Aduana occupy the 16th position on the log and are without a win after three rounds of games still but have a match in hand — against Hearts of Oak.