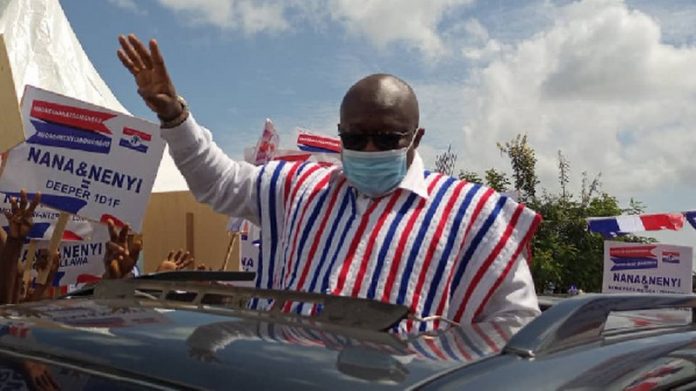 Supporters of the New Patriotic Party (NPP) stormed the streets of Senya in the Awutu Senya West constituency to participate in a health walk.

The walk was organised by the Member of Parliament (MP) for the area, George Andah to wind up the campaign with just a day to go for the December 7 election.

The health walk, which saw massive patronage, also sought to energise the base of the party according to the Andah campaign.

Speaking to the charged supporters to round up, the MP urged supporters to change the Awutu Senya West narrative of a one-term MP by giving him another four more years in order not to truncate the gains made during his tenure and that of President Nana Akufo-Addo.

He said the Awutu Senya West constituency is not ready to turn back the clock of development and expressed confidence for a peaceful win come December 7.

Regional Treasurer of the NPP and Board Chairman of the Cocoa Marketing Board, Dr Joseph Kwabena Essibu, said Ghana’s development trajectory is on course and urged supporters to intensify campaign to secure a massive win for the parliamentary and presidential candidates.

I am focused on providing development – Birim North DCE